KUALA LUMPUR: The Malaysian Hockey Confederation (MHC) Thursday released men's and women's team lists for the Jakarta Asian Games, with Kirandeep Kaur stealing the limelight.
The 15-year-old was the only 'new face' in both the men's and women's teams who will be gunning for gold and bronze in Jakarta respectively.
MHC Technical Director Terry Walsh was all praise for the Form Three student.
"The rest of the players, men's and women's, are familiar faces with Kirandeep Kaur being the exciting new inclusion. I have watched her in training as well as matches, and I believe she has tremendous potential at such a young age," said the International Hockey Federation (FIH) Master Coach.
TimeSport had reported on Wednesday that Kirandeep Kaur will become the youngest hockey player in Malaysia to play in the Asian Games, thanks to visionary coach K. Dharmaraj.
And when asked his projection on what the men and women are capable of at the Asian Games?
"I expect both our teams to break new ground in the Games. The women should put up a good fight to qualify for the semi-finals and then chase for a medal, while the men should play in the finals," said the two-time Olympian Australian.
The men are in Group B with Pakistan, Bangladesh, Oman, Kazakhstan and Thailand while the women are in Group A with China, Japan, Hong Kong and Taiwan.
Yesterday, players from both teams received shoes sponsorship from Vik Network.
MEN -- S. Kumar (gk), Hairi Rahman (gk), Sukri Mutalib, Razie Rahim,
Syed Syafiq Syed Cholan, Azri Hassan, Faiz Helmi Jali, Nabil Fiqri,
Marhan Jalil, Meor Azuan Hassan, Fitri Saari, Joel Samuel van Huizen,
Amirol Aideed Arshad, Tengku Ahmad Tajuddin, Faizal Saari, Nik Aiman Nik Rozemi, Firhan Ashari, Shahril Saabah.
WOMEN -- Farah Ayuni Yahya, Mas Huzaimah Aziz, Siti Noor Amarina,
Juliani Din, Raja Norsharina, Nuraini Rashid, Fatin Shafika,
Fazilla Sylvester Silin, Wan Norfaiezah Saiuti, Surizan Awang Noh, Norazlin Sumantri, Hanis Nadia Onn, Nuraslinda Said, Nur Syafiqah Zain, Nur Amirah Shakirah, Nur Zafirah Aziz, Kirandeep Kaur, Noor Hasliza Ali.
Posted by Jugjet Singh at 5:38 PM 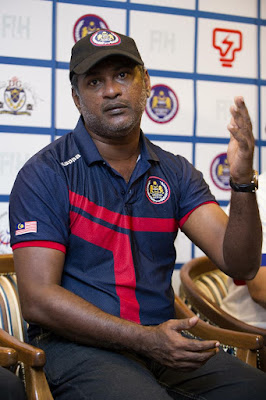 KUALA LUMPUR: National women's coach K. Dharmaraj (pic) was admitted to a hospital on Wednesday for indigestion problems, but Malaysian Hockey Confederation (MHC) are not ready to push the panic button.
After returning from the Australian Tour, Dharmaraj had complained about his stomach becoming bloated after every meal.
He has undergone blood tests, ultra sound as well as many other tests: "The doctors have done many tests on me but my condition is still the same as they can't seem to find the cause. All the tests indicate nothing is wrong with me, but everytime I have a meal, I become bloated and come down with a fever," said Dharmaraj.
Subahan said: "I have received the latest news about Dharmaraj from team manager Lailin (Abu Hassan). Tests are still being done to find the cause of his discomfort, but the early indications are that he might recover in time for the Asian Games."
The women's squad will play their first Group A match against Hong Kong on Aug 19.
"The entire coaching staff as well as players are praying for Dharmaraj's speedy recovery. The girls' are really worried, as they are very attached to him and hope he will be in Jakarta to guide them.
"There are a few more tests to be done, and hopefully he recovers soon," said Lailin.
Posted by Jugjet Singh at 5:35 PM