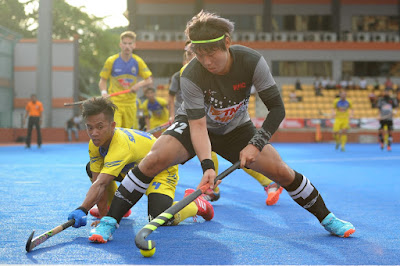 UNIVERSITI Kuala Lumpur (UniKL) and Tenaga Nasional will be riding on their mammoth draws against title favourites when they face another challenging time Sunday in the Premier Division of the Malaysia Hockey League.
On Friday, UniKL held Kuala Lumpur Hockey Club (KLHC) 1-1, while all-local outfit Tenaga Nasional did the unthinkable by holding double champions Terengganu Hockey team (THT) 4-4.
And Sunday, UniKL will play Maybank while Tenaga square off against KLHC.
Tenaga assistant coach M. Kaliswaran said they hope to ride the draw tide in another gruelling match.
"We are the only team in the Premier Division without foreign signings, and it was a proud moment when we held double champions THT to a draw (THT have six foreign signings).
"And tomorrow (Sunday) I believe my players will be riding on that boost when we face another title contender," said Kaliswaran.
It was Tenaga's first point after three matches, and they lost narrowly 4-3 to Maybank and 1-0 to UniKL previously.
As for UniKL, coach Arul Selvaraj echoed the same sentiments.
"After grabbing a point from table-toppers KLHC, I believe my young brigade will face their next match with more confidence.
"But we have our feet firmly on the ground, and even though we had beaten Maybank last week in the Tan Sri Alagendra Cup (1-0), it will be entirely a different proposition this time around.
"We need to be more clinical, as at times we are guilty of wasting too many chances," said Arul.
SUNDAY: KLHC v Tenaga Nasional (KLHA, 6pm), Sapura v Terengganu HT (Tun Razak, 8pm), UniKL v Maybank (KLHA, 8pm).

Day of the underdogs... 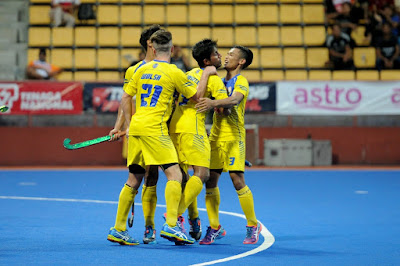 UNIVERSITI Kuala Lumpur (UniKL) almost turned into Giant-killers when they held fancied Kuala Lumpur Hockey Club (KLHC) 1-1 in the Premier Division of the Malaysia Hockey League yesterday.
And Tenaga Nasional also rose to the occasion to hold double champions Terengganu Hockey Team 4-4.
KLHC's longest serving player, since their Arthur Anderson days, Roslan Jamaluddin was a dejected man after the draw.
"We only played in patches and were well below what we are capable of. This is not the way to play if we want to claim a title this season," said Roslan who was a former international goalkeeper.
KLHC forced the first penalty corner of the match in the third minute and South Korean import Nam Hyun Woo sent in a low drag flick that beat UniKL custodian, James Caragh, all the way.
However, Off their second penalty corner in the 50th minute UniKL found their equaliser when Mohamed Tousiq sent in a deft drag flick after being set up by Najmi Farizal from a delightful set-piece.
"We played like it was a friendly game and lost two precious points, this will allow the other teams to claw back in the later stages of the League," said Roslan.
UniKL coach Arul Selvaraj was delighted with the point: "I must say my men showed tremendous spirit and were not daunted by the fact that they were up against a formidable side.
"We absorbed the pressure well and slowed down the pace in the first three quarters to break their rhythm. To us the draw is as good as a win and I hope that this match will give confidence to the players to start believing in themselves."
RESULTS: TODAY: Premier Division -- Maybank 1 Sapura 2, UniKL 1 KLHC 1, Tenaga 4 Terengganu HT 4.