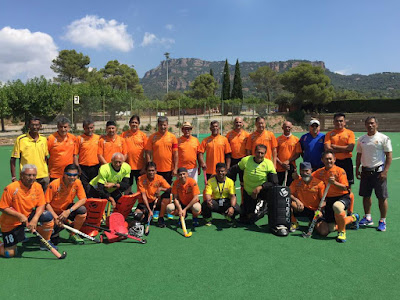 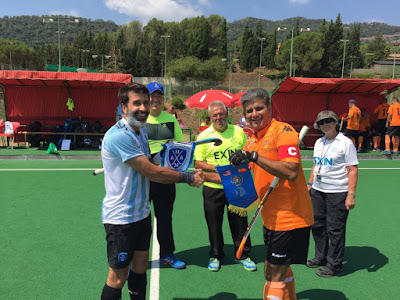 KUALA LUMPUR: The Malaysian veterans' 55+ team beat Argentina 2-0 Monday to qualify for the quarter-finals of the Masters Hockey World Cup in Terrassa, Spain.
The team, coached by Olympian Sarjit Singh, had earlier beaten Ireland 9-0. They qualified for the knock-out stage with two matches in hand against Italy Tuesday and Germany Wednesday -- to try and top the group.
V.  Chandrasegar (45th) and Derek Fidelis (51st) scored for Malaysia.
"We achieved our target of playing in the quarter-finals and now we need to keep the momentum in the next two games to top the group.
"We missed too many sitters against Argentina, and need to improve not only at the group stage, but to get it right in the semicircle during the knock-out as well," said Sarjit Singh, who was former national skipper.
Malaysia are also competing in the 45+ event, and after a 2-1 win over Scotland they lost 3-0 to France.
The 45+ play Germany next to decide their fate.
Posted by Jugjet Singh at 9:57 PM

Finally -- a draw for Malaysia

KUALA LUMPUR: The Malaysian men's hockey team finally shared the spoils with Australia A, when they drew 2-2 in Perth Monday.
However, it came at the back of three 3-2, 4-2 and 3-0 defeats, and the national side will play their last friendly on Wednesday.
The team is in Perth for their final Asian Games preparation, and the scores are still not encouraging enough as coach Stephen van Huzien and his men have been targeted to win gold in Jakarta and qualify for the 2020 Tokyo Olympics.
Yesterday, Australia A took the lead in the eighth minute, and Fazial Shaari equalsied in the 21st while Razie Rahim gave Malaysia the lead off a 52nd minute penalty corner.
However, with four minutes to end, Australia A scored to share points. Malaysia only had two penalty corners in the match, while Australia A had five.
Van Huzien said: "The game was tight and close and we did create some good chances and showed clever individual skills but lacked in the final touch.
"In the end, it was either poor finishing, not sharp enough, or the ball was saved by goalkeeper."
As an example, van Huizen said: "We had a good chance towards the end with a breakaway (counter-attack) but the final execution was not good enough."
The good part of the game with excellent invividual skills was displayed by striker Faizal.
"We scored the equalsier when a long pass from Razie found Faisal in the semi-circle and he dummied the goalkeeper to go down, and hit into goal," said van Huizen.
After three defeats and a draw, Malaysia will surely be looking for a winning end on Wednesday.
For the record, Australia A is made up of state as well as retired players trying to break into the national World No 1 side.
Posted by Jugjet Singh at 5:24 PM