MALAYSIA took the match into extra-time, before bowing out to France 4-3 in the bronze fight at the Champions Challenge II in Dublin yesterday.
The Challenge ended with no medal to show, and now the challenge of rebuilding for the world cup qualifiers will start when they return home.
Malaysia were 2-0 down 20 minutes into the match, and it looked like it was all over, and they were heading for a hiding.
But Hafifi hafiz pulled one back in the 41st minute, only to see France sail ahead to a 3-1 lead in the 41st minute.
However, goals from S. Selvaraju and Razie Rahim in the 58th and 65th minutes respectively took Malaysia into the extra-time playoff.
However, France bounced back and scored a golden goal for the bronze medal.
Malaysia will now have to re-build before the New Delhi World Cup qualifier in November, where only the gold medallists gain entry.
There will be three qualifiers, and the four Asian teams who will play for the three tickets are Malaysia, China, Japan and Pakistan. Africa and Oceania will have one team each, while Europe will have a brigade of nine teams, and Pan America three teams.
There will be six teams battling for one ticket in each qualifier, and it looks like another uphill task for Malaysia to play in New Delhi.
RESULTS: Third-Fourth: Malaysia 3 France 3 (France win golden goal); Fifth-Sixth: Japan 9 Russia 2; Seventh-Eighth: Austria 4 Chile 2.
Posted by Jugjet Singh at 9:56 PM

THE Malaysian Hockey Federation (MHF) coaching com mittee meeting on Saturday saw council members revolt against their president Dr Balbir Singh, and there was a stand-off until all the members he appointed were sacked, before calm was restored.
Dr Balbir, who could not be contacted for comment, stormed out of the meeting, but returned later to helm the committee. It is said that he will quit the committee by Tuesday, after meeting MHF president Tengku Abdullah Sultan Ahmad Shah.
Among those who were removed was their secretary R. Vivikanandan and five standing committee members ap pointed by the president.
“It was stormy, and tables were thumped, to put it mildly, as state representatives were angry because the appoint ments were constitutionally illegal. And the meeting only resumed after the president agreed to remove all the illegal appointments,” said a coaching committee member who declined to be named.
A vote to remove the standing committee and secretary was held, and the outcome was 7-1 in favour of removing them. Two members abstained, while four other state rep resentatives did not attend the meeting.
In their place, the various state representatives are now made members, while seven new members were appointed to the standing committee.
Another issue that he members were unhappy about was the manner coaches for the various age-groups, and national teams were selected.
“We were never consulted when coaches were appointed for the various age-groups, and national sides. The ap pointments were made by a member of the MHF council, and the coaching committee president was told to rubber stamp them.
“This is a serious issue, and from now, we will be making the recommendations, for the council to approve and not the other way around,” said a member.
Also thorny was the appointment of coaches to the Under- 16 and under-18 teams which played friendlies in Johor and Singapore during the Junior World Cup.
“Five coaches were appointed to both the age-groups without our knowledge, and we will get to the bottom of this issue when the MHF council meets in the middle of the month.”
As it is, respect for Malaysian hockey is at a low ebb, and a strong message needs to be sent by MHF president when he chairs the council meeting.
Posted by Jugjet Singh at 6:00 PM

The defeat in pictures

S. Selvaraju down and out like the Malaysian team after they lost 2-1 to Ireland in the semis.

Ireland players jump for joy, while Malaysians can't believe their luck as the clock in the background turns 0:00 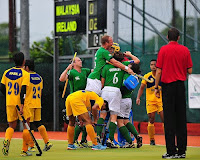 Ireland 2 (John Jermyn , David Hobbs) Malaysia 1 (Tengku Tajuddin)
Ireland held out for a famous victory at Belfield this afternoon amid the pouring rain, edging out a lively Malaysia to set up a revenge mission in tomorrow’s final against Poland.

They were made to live on their nerves, though, as a corner conceded 15 seconds from time could have proved a costly error.

David Harte, though, stood tall and when the rebound did not fall Tengku Tajuddin’s way, Ireland celebrated wildly with each player joining the embrace before saluting the sizable crowd in the grandstand.

It was a game of serious swings in momentum as first Malaysia and latterly Ireland enjoyed long periods of dominance. John Jermyn once again got Ireland off to the perfect start, firing his sixth goal of the tournament with a low drag in the fourth minute.

But the Asian side controlled possession and Ireland’s deep press played into the Malaysian’s hands, given their superior skills in tight situations.

Harte did well to smother Ismail Abu’s effort while Tajuddin’s beautiful ball was deflected onto the post by Selvaraju Sandrakasi. But they did not have to wait long for their just reward when Tengku pounced on a corner rebound - following Amin Rahim’s drag - to finish adroitly from three yards midway through the half.

During this period, Eugene Magee was providing a decent outlet and his exchange with Mitch Darling showed an Irish threat still existed. Jermyn’s next corner drew a top save from Kumar Subramaniam as well as denying Graham Shaw in the aftermath.

Indeed, Ireland almost took the lead just three seconds before the half-time hooter when Stephen Butler’s raking overhead found the unlikely target of Ronan Gormley as the furthest man forward but the right-back flashed across the goal. 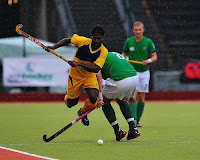 And the hosts took that momentum into the second period, winning their third corner inside 50 seconds of the turnaround, Mikey Watt reversed while Tim Lewis - Ireland’s stand-out defender in the tournament to date - produced an amazing 70-metre pass to play in Magee.

John Jermyn’s yellow card - for an off-the-ball barge on Sukri Abd Mutalib - barely broke their stride. On his return to the field, he would later receive a green card for not retreating.

Tajuddin did pop one past Harte on the end-line but Joe Brennan cleared the raised ball well to safety before Magee provided the game’s best solo action; racing 40-metres in between five defenders to win a corner. From it, Ireland got the crucial score, using a first switch routine of the competition.

Butler’s one-two with Magee created space at the flick-spot but his drag was saved. Lewis’ follow-up hit the post but the third phase fell to David Hobbs to slide under Subramaniam.

The volume of rain saw numerous slips and misjudgements, adding to the excitement of the game. A massive overhead created havoc between Johnny Jackson and David Harte, bouncing over the goalkeeper’s head at the top of the circle.

Sandrakasi, though, was not tall enough to guide the ball into the net as he snuck in around the back. And Ireland continued to live on their wits as they sank back deeper and deeper, giving away cheap possession with endless overheads. 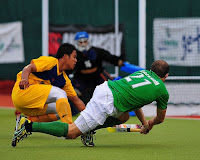 It was always likely to give up one major chance for the Malaysians to equalise and it came with 15 seconds on the scoreboard when Joe Brennan was penalised wide on the right flank.

But Harte filled his goal well and Paul Revington had victory in the most meaningful match of his embryonic career as Irish national coach.
Posted by Jugjet Singh at 4:52 PM