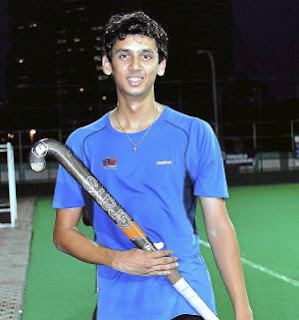 
NATIONAL coach Stephen van Huizen named his final 18 for the Azlan Shah Cup in Ipoh on April 6-16, and the mission is not to finish seventh in the 25th Edition.
Malaysia finished at the bottom of the six-team pool in the last edition, and looking at the opponents, it will be another battle to keep afloat in Ipoh.
Missing from the list was No 1 goalkeeper S. Kumar who tore his adductor muscle, around his left groin, while playing in the last Test against Australia in Perth 10 days ago.
Also absent was stalwart defender Baljit Singh.
"Five minutes into the match against Australia i suffered a pull around my left thigh area and later found out it was a tear which needed at least four weeks to recovery to heal.
"It is better I sit out the tournament and allow our two younger goalkeepers to play and go through my recovery programme. I will definitely miss the tournament, but this is not the first time," said Kumar.
In 2014, Kumar suffered a similar tear and it was on his right thigh.
The two goalkeepers selected by Stephen are Hairi Abdul Rahman and Hafizuddin Othman.
"Not having Kumar for the tournament is a big blow as he has been training hard for it and played well in the Australian and New Zealand Tours.
"However, looking at the bright side, I will get to test my other two goalkeepers in this tournament as we prepare to qualify for the World Cup and Olympics -- which are the bigger agenda," said van Huizen.
Malaysia will be playing against defending champions New Zealand, world No 1 Australia, India, Canada, Pakistan and Japan. The first four teams have qualified for the Rio de Janeiro Olympics.
Van Huizen will also be trying out defender Najib Abu Hassan, midfielder Joel Samuel van Huizen and forward Nik Aiman Rozemi.
"These are the new faces who will be tried out in the tournament while we give some old hands a rest.
"We already know the strength of players like Baljit, and that's why he has been rested while we give others a chance to play. This is a team for the future as we strive to qualify for the 2018 World Cup and the 2020 Olympics," said van Huizen.
MALAYSIA -- Goalkeepers: Hairi Abdul Rahman, Hafizuddin Othman; Defenders: Najib Abu Hassa, Shukri Mutalib, Razie Rahim, Faiz Helmi, Izad Hakimi; Midfielders: Marhan Jalil, Fitri Shaari, Joel Samuel van Huizen, Nabil Fiqri, Meor Azuan; Forwards: Ramadan Rosli, Haziq Samsul, Firhan Ashaari, Nik Aiman Rozemi, Shahril Saabah, Rashid Baharom.
Posted by Jugjet Singh at 5:11 PM