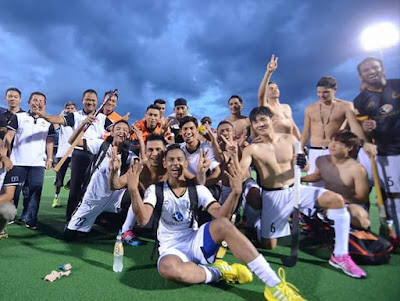 CHAMPIONS Terengganu Hockey Team (THT) received an easier TNB Cup semi-finals draw when they were paired with fourth placed Maybank Monday.
League runners-up Sapura will have a tougher time after drawing third-placed Kuala Lumpur Hockey Club (KLHC) in the other semi-finals.
Both first-leg the semis will be held on Wednesday at the Kuala Lumpur Hockey Stadium, with the return leg on Friday.
THT has the League title, Sapura the Alagendra Cup, KLHC the Charity Shield while Maybank is the only team without silverware yet this season.
And THT are on a mission to complete their third consecutive double in the Premier Division of the Malaysia Hockey League.
"Even though we have been paired with a team which finished fourth in the League, I believe it will not be an easy match as Maybank are, and have also shown in the last two seasons, that they are a fighting side," said THT coach Sarjit Singh.
Sarjit remembers well, as THT played Maybank in both the previous TNB Cup semi-finals.
"Coincidentally, we also played Maybank in the semi-finals of the TNB Cup in the last two seasons. And we lost both the first legs, and only qualified for the final by making a comeback in the second legs.
"Maybank have also given every team in the MHL a good fight, and we need to play much better to win the first leg itself this season," said Sarjit.
For the record, THT beat Maybank 5-1 and 5-2 in the League.
Maybank team manager R. Premkumar said: "We have a development squad made up of youth and seniors as guide. It has been a close season for us, and I believe we have nothing to lose as underdogs in a two-leg semi-finals."
Sapura coach Yahya Atan has done his homework, and is ready to face KLHC. KLHC won both the League matches 5-2 and 3-0.
"We lost earlier after leting in two first quarter goals in both the matches, but after studying the match videos, I know what not to do against KLHC in the TNB Cup," said the experienced coach.
Yahya will also be tightening his penalty corner run-outs, which were ineffective in the League against KLHC.
As for KLHC team manager Ahmad Anuar Sham, he had a limited choice of either being paired against seeded sides Sapura, or THT.
"Both the seeded teams are strong, so it really did not matter who we played in the semi-finals. We will have to give our best in both the legs to play in the final," said Ahmad.
WEDNESDAY: TNB Cup semi-finals First Leg: Terengganu HT v Maybank (KLHA, 6pm), Sapura v Kuala Lumpur HC (KLHA, 8pm).
President's Cup: TNB Thunderbolts v Politeknik (Tun Razak, 6pm), UiTM-KPT v SSTMI Tun Razak, 8pm).
Vivian Soars Cup: Semi-finals: SSTMI v PKS-Uniten (Ministry of Education, 6pm), Blue Warriors v ATM Pernama (Ministry of Education, 8pm).
Posted by Jugjet Singh at 5:59 PM

TERENGGANU Hockey Team (THT) defended their Malaysia Hockey League Premier Division League title for the third consecutive year when they beat Tenaga Nasional 3-1 at the Batu Buruk Stadium Sunday.
It was an unexpected title, as coach Sarjit Singh and his men were not in contention as the title charge was led by Sapura until the eighth match.
Yesterday, Fitri Shaari (5th), Tengku Ahmad Tajuddin (18th), Ismail Abu (32nd) delivered for THT while Ramadhan Rosli scored for Tenaga in the 33rd minute.
THT received RM100,000 while second placed Sapura won RM60,000 and third placed Kuala Lumpur Hockey Club (KLHC) RM40,000.
THT and Sapura will be seeded while KLHC and Maybank will draw lots today to decide who they play in the TNB Cup semi-finals which will he held on Wednesday.
"We were not in contention after the first round matches but made a late charge in the second round to defend our League title. As I said before its easier to win a title that to defend it, and my players have won three consecutive League titles and I am very proud of them," said Sarjit.
After Tenaga beat Kuala Lumpur Hockey Club (KLHC) 2-1 on Friday to put THT in contention for the title, Sarjit and his men played by the book yesterday.
"There was no fancy play or trying too hard as we kept our composure and won the match. Now, we are looking forward to win our TNB Cup for the third consecutive year as well," said Sarjit.
RESULTS -- Premier Division: Terengganu HT 3 Tenaga Nasional 1, Kuala Lumpur HC 4 UniKL 1, Sapura HC 2 Maybank 1.
Division One:
Quarter-finals Second Leg:
Nur Insafi 0 TNB Thunderbolts 5.
(TNB Thunderbolts won on 8-1 aggregate)
ATM Airod 2 SSTMI 1
(SSTMI win on 6-4 aggregate)
Ipoh City Council 3 v Uitm-KPT 2
(Aggregate 4-4, Uitm-KPT win shoot our 3-2)
BJSS 1 Politeknik 5
(Politeknik won on 8-3 aggregate)