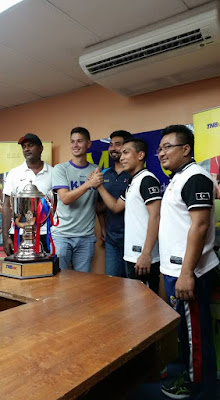 TWENTY bus-loads of fans from Terengganu will arrive Sunday to cheer-on Terengganu Hockey Team (THT) in their quest to win back-to-back doubles in the Premier Division of the Malaysia Hockey League.
THT will face nemesis Kuala Lumpur Hockey Club (KLHC) for the TNB Cup at the National Hockey Stadium in Bukit Jalil, with no clear favourites.
KLHC lost both their titles to THT last season, and also crumbled 5-4 in the League this year -- but their 6-2 Charity Shield win still troubles THT.
Playing at the Batu Buruk Stadium in Kuala Terengganu, 3,500 fans in a 2,000-capacity stadium played a role of the twelfth player to cheer on THT to a slim win for the League title.
"Fans played a big role in our success this season, and as a reward, as well as for another round of support, 20 buses will arrive from Terengganu for the TNB Cup final," said THT assistant coach Shamsol Ismail.
THT are dead serious about claiming the double again, as coach Sarjit Singh could be seen, from the window, busy training his charges while the press conference was ongoing.
Terengganu skipper Shahrun Nabil feels they have a good chance if they play like they did against Maybank in the second leg of the TNB Cup semi-finals.
"We need to bring out that same determination on Sunday, because we were down 3-5 to Maybank from the first leg, but went on to carve a hard-fought 7-2 victory in the return leg. That's the way I want my team-mates to play again against KLHC," said Shahrun Nabil.
KLHC coach K. Dharmaraj believes it will be a close game, and could even end up in a shoot-out.
"In my 17 years in the MHL, I have taken my side to 15 finals and lost four titles on shoot-outs. TNB Cup finals, especially, have been very close affairs and so, we are prepared for all eventualities this time around," said Dharmaraj.
KLHC will again rely on Malaysia's No 1 penalty corner flicker Razie Rahim, who has delivered a total of 11 goals this season -- one field, nine penalty corners and one penalty stroke.
The other KLHC trump card is Pakistan import Ali Shan who has scord six of which three were from field and three from penalty corners.
As for THT Premier Division top-scorer Faizal Shaari, 17 goals, will be the man to stop. Faizal scored 10 field, five penalty corner and two penalty stroke goals and is an all-rounder.
THT also have Tengku AHmad Tajuddin, 10 goals, who has been playing his best games in the TNB Cup knock-out stage.
With no clear favourites, the TNB Cup final could go either way, but one thing is for sure -- it will be worth the time and effort put in by fans to travel to the stadium, or watch it live on Astro Arena 801.
SUNDAY: Final -- Kuala Lumpur Hockey Club v Terengganu Hockey Team (8pm, Pitch II); Third-Fourth: Maybank v Sapura (6pm, Pitch II).
Note: Both matches at the National Hockey Stadium in Bukit Jalil.
Posted by Jugjet Singh at 6:08 PM

Australian help on the way...

MALAYSIAN Hockey Confederation (MHC) president Datuk Seri Subahan Kamal and his team are set to celebrate their 100-days in office in style.
In the cards is a Memorandum of Understanding (MoU) with Hockey Australia, the unveiling of a five-year blueprint to take Malaysia into the 2020 Tokyo Olympics, and many changes in the Malaysia Hockey League.
Subahan walked into the MHC office unopposed on May 14, and almost saw Malaysia qualify for the Rio de Janeiro Olympics, but fell 3-2 to India in the quarter-finals of the World League Semifinals in Belgium.
At a dinner hosted for journalists in Antwerp, Subahan had said that even though he had no hand in preparing this team, he took full responsibility for their failure, and will unveil a plan to 'make sure' Malaysia play in Tokyo.
Australian Terry Walsh was secured, MoU with Hockey Australia ready to sign and a comprehensive blue-print will be unveiled in a Press Conference at the National Sports Council (NSC) on Wednesday.
First the exciting MoU with World No 1 Australia.
Even though Malaysia are one step behind Singapore on this matter, it does not matter.
The Lion City signed an MoU in July, after a high of holding Malaysia Under-20 side to a 2-2 draw before losing the Sea Games gold 4-3 on penalties.
Singapore plan for two more silvers, men and women, in the 2017 Kuala Lumpur Sea Games and are even talking of an upset on our home soil.
Malaysia want to play in the World Cup and Olympics again.
The MoU details are still sketchy, but if it follows what Singapore has signed, then Malaysia will send teams to play in the Hockey Australia national championships in 2016 to 2018, and their 'Hookin2hockey' programme will be implemented into the MHC coach education programme and coaching.
Coaches and umpire exchange programmes should also be in the documents signed with collaboration with the NSC.
It is also believed that youth development and high performance hockey in the country will receive a big boost from Australia, who have shown to the world that their style of total hockey is what gets the results in World Cups and Olympics.
The five-year blueprint will encompass a detailed route to take Malaysia back into the Olympics, a feat last achieved in Sydney 2000.
The MHC are keeping this development under wraps, but good news should be shared and Hookin2hockey is what we need to get the grassroot hooked to the sport in a fun and systematic way.
And the MHC are also keen to follow up the statement made by Walsh when his appointment as Technical Director was made known; That he wanted to see all ethnic groups in Malaysia play like they did in the old days.
The fine print and more details will be elaborated by Subahan on Wednesday, and for starters, he and his team get top KPI grades from this scribe, in their 100-days in office.
And its without taking into account that they reduced MHC's debts from RM2.8 million to RM1.7 million.
Posted by Jugjet Singh at 11:32 AM