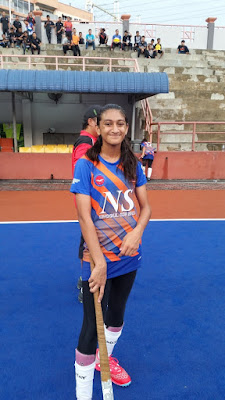 KUALA LUMPUR: Kirandeep Kaur (pic), at 15, will become the youngest hockey player in Malaysia to play in the Asian Games, thanks to revolutionary coach K. Dharmaraj.
There were many obstacles in her way to gaining the historical spot, and a last minute frantic appeal had to be made to include her in the 'long list'.
(Long List is names of athletes submitted by the respective National Sports Associations in January and it can contain as many names as the associations want).
Kirandeep Kaur was only called up for training by Dharmaraj in May, and the Form Three student of SMK Bukit Bandaraya in Bangsar was promptly included in the World Series in Singapore a month later.
She played in all six matches and scored a goal in the final against Thailand, which Malaysia won 6-0.
She was then selected for the hockey playing tour in Brisbane recently, where Malaysia drew two matches and won three -- Kirandeep Kaur also scored Down Under.
However, since she was not listed in the Long List sent to the Olympic Council of Malaysia (OCM) the Malaysian Hockey Confederation (MHC) had to make an appeal for her inclusion.
And after a few days of Red Tape and some bungling, the Olympic Council of Asia (OCA) finally agreed to give her accreditation Wednesday.
She will not only be the youngest Malaysian women, but also the youngest among the men who made their international debut at the age of 14 in Singapore, celebrated her 15th birthday during the Brisbane Tour, and now representing the country at an Olympic Qualifier.
However, the lanky lass did not have it easy, as she did not even play in the National Under-16 in March due to various reasons, but in the end, she beat the odds and coach Dharmaraj's brave break deserves a standing ovation.
MHC are expected to name the women's and men's squad on Thursday.
Posted by Jugjet Singh at 8:32 PM