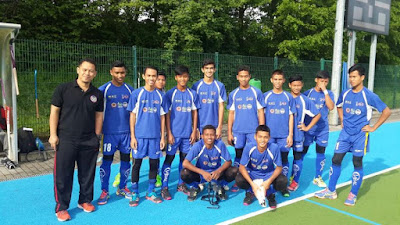 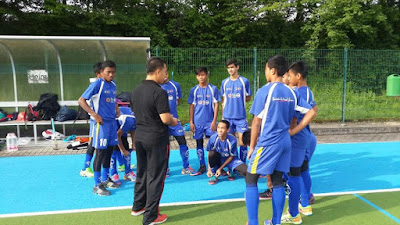 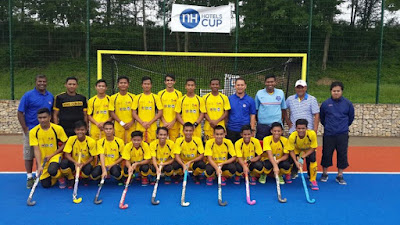 THE MALAYSIAN Under-16 team lost 2-0 to the German Under-16 team in a friendly in Mannheim Friday, but had plenty of chances to seal off the match.
Inexperience saw them bungle five penalty corners, and five open play sitters.
The boys were selected after the recent National Under-16 tournament, and underwent a four-day training in Ipoh during the Azlan Shah Cup.
In Mannheim, they will play against Netherlands, German Under-16 and German Under-17.
They start with Germany Under-16 Sunday, for the Whitsun Cup.
The match was played in 20 minute halves and Germany Germans scored a goal in each half via quick counter-attacks.
According to coach Nor Saiful Zaini, the scoreline was a little too flattering towards the hosts.
"We had five clear chances to score but poor finishing, inexperience and a really good goalkeeper stood in the way of any possible turnaround. The Germans were physically bigger but we held our own against them.
"We also had five penalty corners to Germany's one but failed to convert any. Overall, I am happy with the performance and look forward to the tournament Sunday", said Saiful.
This is an invitational tournament where Malaysia were left out for the last two editions. However, Malaysia finished second behind Germany in the Whitsun Cup when it made its debut in 2010.
MALAYSIAN Under-16: Goalkeepers: Hamiz Ahir, Helmi Fazli; Defenders: Kamarulzaman Kamaruddin, Zulfitri Zin, Arif Syafie.
Midfielders: Pavandip Singh s/o Gurdip Singh, Amirul Hamizan, Akram Hakkam, Granson Noel, Faiz Aiman, Zafri Afiq, Syarman Mat Tee.
Forwards: Haridzmi Nizam, Noor Firdaus Rosdi, Muhibuddin Moharam, Syamin Naim, Saifuddin Azli, Akhimullah Anuar.
Coach: Nur Saiful Zaini; Assistant Coach: Sufian Mohamed.
Posted by Jugjet Singh at 5:38 PM

THE Fourth Edition of Asian Champions Trophy finally received  recognition as the International Hockey Federation (FIH) will accord it world ranking points.
Ranking points have become paramount, as the World League format to qualify for World Cups and Olympics relies heavily on it when teams are tied on the same placing.
Malaysia finished sixth in the World League semi-finals in Antwerp, but Argentina World League sixth placed New Zealand went to the Rio de Janeiro Olympics because they were higher ranked.
The decision by the FIH Executive Board, which met in April, was conveyed to the Asian Hockey Federation on May 12.
"This is great news for Asian teams and it will surely make the tournament more competitive as well raise its profile," said Malaysian Hockey Confederation CEO K. Logan Raj.
"From our perspective, gaining valuable ranking points will surely boost our chances of moving up the world rankings."
With a higher profile, it can be rest assured that this years Asian Champions Trophy, slated from Oct 20-30 in Kuantan, could see a more closely challenged event, thus giving Asian hockey the much needed boost.
The other five teams which will compete in Kuantan are India, Pakistan, South Korea, China and Japan -- based on the top-six finish in the last Asian Games.
The ACT, incepted in 2011, was not accorded ranking points and teams started to take it lightly by sending their development squads.
Prior to this teams in Asia could only gain ranking points from continental tournaments like the Asian Games or Asia Cup.
And for the second-tier Asian teams, the FIH confirmed that an Asian Champions Challenge will be held where ranking points will also be accorded.
Malaysia ranked 13th in the World, held world no 8 New Zealand 3-3 twice in the Azlan Shah Cup pool and bronze medal matches, indicating that the team's rankings are well below their playing level.
The first edition of the ACT was held in Ordos, Inner Mongolia, in 2011 followed by Doha, Qatar, in 2012 and Kakamigahara, Japan, in 2013.
Malaysia finished third in all three ACT's, which did not offer any ranking points then.
Posted by Jugjet Singh at 8:27 AM