ANDERSON Thunderbolts created Junior Hockey League (JHL) history when they held UniKL Young Guns 2-2 in the Second Leg quarter-finals to become the first Division Two team to advance to the TNB Cup semi-finals on 5-4 aggregate.
Rising from Division Two, by becoming champions in the play-off and claiming a spot in Division One next season, the Ipoh school lads also made sure that the semi-finals is an all-Thunderbolts affair.
Anderson will now play BJSS Thunderbolts in the two-leg semis on Wednesday and Friday, while the other semis will be between SSTMI Thunderbolts and SSP-MSP Thunderbolts.
Anderson, who beat Division One team UniKL Young Guns 3-2 in Bukit Jalil in the first leg, rose to the occassion to hold them at the Azlan Shah Stadium yesterday.
Najme Hayazi (22nd and 27th) became the hero for Anderson, before UniKL fought back with goals from Zul Yadain Kasman (55th) and Wan Haziq Hisyamuddin (61st) but lost out on aggregate.
"I told my players before the match if they give their best, they will create history which will be sweet memories for them decades to come and they rose to the challenge," said Anderson team manager Saiyuti Samat.
Anderson's fairytale started by becoming Division Two Group A champions, followed by winning the Division Two play-off final 1-0 against BJSS Juniors.
They earned their rights to play in Division One next season, and then became giant-killers by edging UniKL who finished third in Division One.
"Now, we want to go even further by beating BJSS (Thunderbolts) In the semi-finals. I believe my players deserve to play in the final of the TNB Cup as well," said Saiyuti.
Posted by Jugjet Singh at 7:46 PM 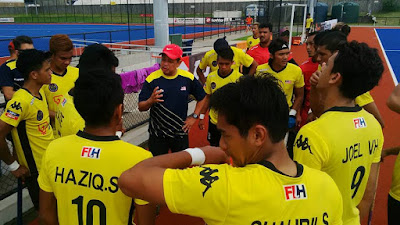 THE national seniors lost their first Test match against New Zealand 4-1 in Tauranga Sunday. The Malaysian goal was scored by Razie Rahim off a penalty corner attempt.
The national team, on a Tour of New Zealand and Australia to play 10 matches, will play the Kiwis three more times.
Shay Neil, Jacob Smith, Nick Wilson and Nick Woods scored for the Kiwis.

The Black Sticks Men have recorded a strong 4-1 win over Malaysia in the first of four tests at Blake Park in Tauranga.
After a slow start which saw them go down 1-0, the Black Sticks powered back with four unanswered goals through Jacob Smith, Nick Wilson, Nic Woods and Shay Neal.
The spotlight was on veteran midfielder Ryan Archibald who became just the third New Zealand player ever to reach 300 caps behind Phil Burrows (343) and Dean Couzins (318).
Archibald made his debut against Malaysia in 1997, and in his 19 year career to date has represented New Zealand at three Commonwealth Games, two Olympic Games and two World Cups.
Head coach Colin Batch said the result was a pleasing start to the series.
“It’s our first game in four or five months so we started a bit slowly, but I thought we really grew throughout the game,” he said.
“We generated some good phases and counter attacks particularly in the second half and that’s pleasing to see going into game two tomorrow.”
Malaysia earned a stroke inside the first 10 minutes but goalkeeper Devon Manchester, fresh off a stint in the Hockey India League, made a great save on Razie Rahim’s attempt.
Early into the second quarter the visitors lit up the scoreboard with Rahim making amends courtesy of a penalty corner flick.
Following the goal though, the Black Sticks found their feet and took control of the game.
Jacob Smith levelled the score midway through the second quarter with a nice final touch on a ball into the circle, before Nick Wilson added to the tally just minutes later thanks to a reverse shot into the corner of the goal.
Holding a 2-1 halftime lead, the Kiwis won their first penalty corner of the game in the 39th minute and Nic Woods obliged with a scorching flick into the top of the net.
In his return to international hockey, striker Shay Neal added a fourth goal for the Black Sticks 10 minutes from fulltime after smashing home a deflection.
The Black Sticks play Malaysia again in Monday’s second test in Tauranga.
Posted by Jugjet Singh at 6:04 PM