TERENGGANU Hockey Team (THT) rose from the ashes to top the Malaysia Hockey League Premier Division Standings when they beat Sapura 4-1 at the Batu Buruk Stadium Friday.
And THT's good luck continued at the Kuala Lumpur Hockey Stadium, when Tenaga Nasional beat Kuala Lumpur Hockey Club (KLHC) 2-1.
The Tenaga upset left KLHC third on the standings, in a match which they were supposed to win and top the table.
After yesterday's upsets, all THT have to do now is to beat Tenaga Nasional at the Batu Buruk Stadium Sunday to lift the Premier Division League title.
"For me, we played the best game of this season to beat Sapura and top the standings for the first time this season. And with Tenaga Nasional pulling off a big upset against KLHC, from outsiders, we now have a chance to defend our League title.
"My players, for sure, will not want to let this golden chance slip away from our grip," said THT coach Sarjit Singh.
Yesterday, last seaon's top-scorer Faizal Shaari with 17 goals, finally scored his first goal for THT in the 48th minute, while Jang Jong Hyun scored a hat-trick in the 6th, 10th and 24th minutes. The Sapura consolation was scored by Firhan Ashaari in the 59th minute.
Tenaga coach Amin Rahim said: "We played for pride as we had not won in the last eight matches. There was no element of trying to deny KLHC a shot at the title, it was just that we had our pride to keep intact."
And Amin said his charges will do the same against THT tomorrow.
"Even though we are virtually out of running for the TNB Cup semi-finals, we will still give our very best against THT in our final League match of the season on Sunday.
"We have nothing against THT and their quest to defend their League title, we will again play for pride and end our League season with another win," said Amin.
RESULTS -- Premier Division: Maybank 1 UniKL 0, Tenaga 2 Kuala Lumpur HC 1, Terengganu HT 4 Sapura HC 1.
Division One: Quarter-finals First Round: TNB Thunderbolts 3 Nur Insafi 1, SSTMI 5 ATM Airod 2, UiTM-KPT 2 Ipoh City Council 1, Politeknik 3 BJSS 2.
SUNDAY: Terengganu HT v Tenaga Nasional (Batu Buruk, 5.30pm), Kuala Lumpur HC v UniKL (KLHA, 8pm), Sapura HC v Maybank (Tun Razak, 6pm). 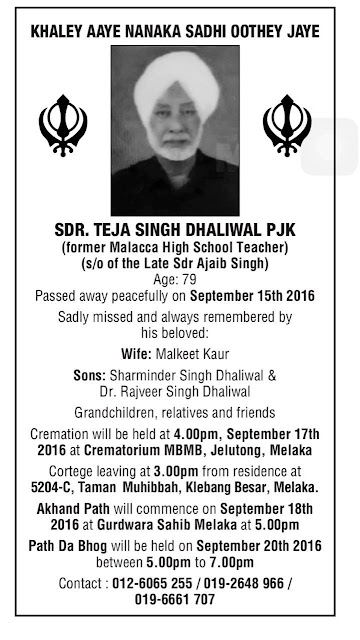 Teja... A life devoted to sports


He was easily identified as he always used to wear white turban and pants.

Serious and stern looking on the exterior but a man with such humility, warm hearted and friendly is the best way to describe Master Teja Singh Dhaliwal who passed away in Malacca on Thursday.

The 79 years old suffered a heart Attack at his home and breathed his last at the Malacca General Hospital.

Teja had undergone a by-pass operation in May this year and really never recovered from it.

My early introduction to a man that I later on admired upon learning more about him was at the Malacca Sikh Temple where Teja volunteered his services, also serving as the Treasurer in 2009/2012 especially during the annual prayers for Sant Sohan Singh Ji.

During my playing days I used to wonder who this gentleman was, always donning white pants, trade marks of his umpiring of Hockey and Cricket playing days.

The MHS Hockey team held for years the record of defeating the Gurney School 36-0 in a Malacca schools Hockey tournament. 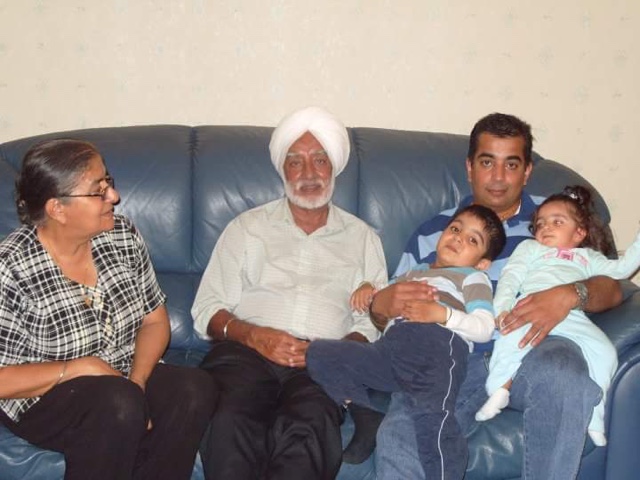 Former international umpire V. Sasidharan had the privilege of playing under the tutelage of Teja in Cricket for the government services tournaments.

" His managerial and human relation skills is something that I always admired and still hold on to as he taught me a lot, " said Sasidharan.

Teja was also credited with teaching history classes with distinction, often opting for story telling to make it more interesting for his students.

MHS had the proud record of being the best school in terms of History grades in the Lower Certificate of Education and Senior Cambridge exams with over 80 per cent scoring distinction when Teja was there.

Rest in peace Sir and may the gates of heaven welcome this great personality as he meets his maker.

Good bye Teja, you will be missed but we will all remember you with sweet memories.