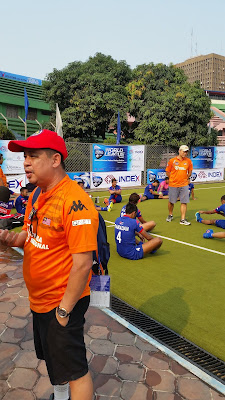 IT WAS a slow start, but Malaysia picked up after the second half to beat Oman 6-1 in the World League Round Two hockey match in Dhaka, Bangladesh, yesterday.
Again, a lower ranked team managed to hold Malaysia to a 1-0 lead in the first quarter, as only Shahril Saabah was on target in the 11th minute off a close tap-in.
Oman are ranked 31st in the World while Malaysia 13th. It was the same script against World No 32 Bangladesh where Malaysia could only win 3-0 on Saturday.
At the half-time break, Malaysia held a slim 2-0 lead, after Razie Rahim finally scored off his fifth penalty corner attempt in the 26th minute.
Tengku Ahamd Tajuddin scored the third in the 33rd minute, off a penalty corner set-piece while the other goals were scored by Aiman Nik Rosemi (42nd, 53rd) and Tengku Ahmad Tajuddin (48th).
Oman got their consolation off Muhammad Al-Lawati 37th minute.
In an earlier match, No 18 ranked China were beaten in sudden-death shoot-out by No 20 ranked Egypt.
The match ended 2-2, and the five-man shoot-out also saw a 2-2 deadlock before Egypt won in sudden-death.
Egypt received two points for their effort, while China one point.

Note: There is a shoot-out in the event of a draw, and the winning team gets two points.

Free daily news on the wall...

WHILE newspapers around the world are facing tough times to attract new and young readers to their print version and are going on-line, Bangladesh has a third option.
Newspapers are pasted on the wall in selected areas all over Dhaka daily, and the public can stand and read it for free.
This is the wall-on-line version that has been around here for at least two decades.
In this way, not only news and appointments and other stuff is circulated, but advertisers also get their moneys worth on people who either do not have the money to buy papres from the stands.
Every day, at least 20 English and Bengali language newspapers are pasted on selected walls around Greater Dhaka, which has a population of 18 million, with 8.5 million in the city centre itself.
The A grade newspapers still have a circulation of 100,000 to 500,000 while the B grade sell around 50,000.
And there are 10 English and at least 50 Bengali newspapers who are still selling strong.
Newspapers published in Bangladesh are written in Bengali or English versions. Most Bangladeshi daily newspapers are usually printed in broadsheets while few daily tabloids exist.
All daily newspapers are morning editions and there are no evening papers in Bangladesh, and only a few offer online versions.
Stories of the day share walls of bustling sidewalks crammed with fruits, clothes, fried stuff, freshly squeezed juices and a host of chai-wallas.
While 'shopping' at the sidewalks and drinking chai on push-carts, people stop and read newspapers on the wall.
And wall circulations can run to the millions everyday.
Posted by Jugjet Singh at 10:23 AM This scribe was fortunate to have worked and learnt the ropes from a master journalist. Solid as a Rokk..
PEKAN: Former New Straits Times (NST) sports editor Lazarus Rokk described the Darjah Indera Mahkota Pahang (DIMP) bestowed on him as an appreciation by Sultan of Pahang, Sultan Ahmad Shah and the Regent of Pahang, Tengku Abdullah for those involved in sports.
Rokk, now a ‘Datuk’, was among 77 DIMP recipients to receive their awards from Tengku Abdullah at an investiture ceremony at Istana Abu Bakar here today.
Also present at the ceremony was Tengku Puan Pahang Tunku Azizah Aminah Maimunah Iskandariah and 215 award recipients held in conjunction with the sultan’s birthday.
Rokk said the award was the highest he had ever received after spending 31 years in the media. Apart from NST, he had also served in The Star and Malay Mail.
“Sports is a subject close to the hearts of the Sultan and the Tengku Mahkota (Tengku Abdullah). Both of them deeply appreciated those involved in sports...not only athletes and sports officers, as even sports writers were also recognised.
“The award recognises my career efforts even though I knew Tengku Abdullah when I was still a journalist and he was active in football,” he told reporters when met here today.
Posted by Jugjet Singh at 9:58 AM