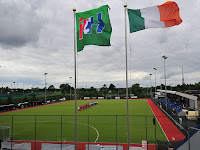 POLAND became the first finalist after their counter-attack game proved too much for France at Belfield this afternoon.

The French had started the strongest, taking the lead through Freddie Soyez’ drag-flick. But two beautifully conceived Polish goals before half-time switched the lead.
Marcin Strykowski got the first response in the tenth minute, profiting from some top skills down the left wing to squeeze the ball past Max Wilson.
And the turnaround continued with a brilliant move, completed with Tomasz Choczaj’s superb in to out run creating the space for Szymon Oszjczyk to tap in.
Choczaj proved a livewire throughout and was unlucky to be denied in the preceding play to the second goal with a diving reverse and hit the sideboard with the first shot of the second half.
Poland’s speedy attacks continued to bear fruit - especially when Lucas Sevestre was sin-binned - with Slawomir Choczaj pulling across the goal from yet another break-out. Their reward came in the 53rd minute from their second corner when Tomasz Duktiewicz powered a drag-flick through Wilson.
With a healthy lead in tact, the wheels fell off somewhat with both Miroslaw Juszczak and Duktiewicz put in the bin for over-zealous tackles in the 58th minute.
But France were unable to take advantage, with Arkadiusz Matuszak pulling off a sensational double-save as Poland played out the match in untidy but effective fashion. 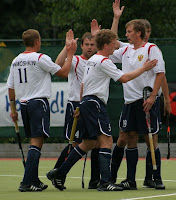 RUSSIA'S greater proficiency in both circles proved the vital factor as Chile created much but threatened little except in the closing four minutes.

Alexander Likov’s 14th minute reverse-stick effort was the sole highlight of the first half as the South American side let four penalty corners slip through their fingers.

Their fifth and sixth corners were comfortably dealt with by Roman Rogov just after the break, too, before Chile goalkeeper Mauro Scaff produced the save of the day.
Diving the opposite direction, he got a strong glove to Sergey Kostarev’s point-blank deflection from the Russian’s first corner of the game in the 44th minute.
And with Alexis Berzcely in the sin-bin, Russia began to turn the screw, winning three corners. The game-winning goal eventually came with seven minutes to go from a pitch-length move.
Felipe Montegu appeared to be heftily fouled but no free ensued. A superb break-out ended with skipper Alexandre Platonov and Alexey Mamoshkin exchanging three passes to round Scaff, the former roll into the open net.
Chile pulled one back with two minutes to left - Thomas Kanegiesser snapping up at the third attempt from Sebastian Kapsch’s wriggle down the left touch-line.
And they had a chance to force extra-time seconds later from their seventh corner but - after a lengthy discussion at the top of the circle - the move broke down at the switch phase.
Russia, therefore, qualify for Sunday's 5th place playoff against Japan while Chile play Austria for the 7th place ranking points.
Posted by Jugjet Singh at 9:03 PM

Japan qualified for the fifth place play-off, taking the spoils from a lively opener to the fourth day of the Champion’s Challenge II in Belfield.

Benji Stanzl broke the deadlock from Austria’s second serious break-out of the day in the 18th minute, bashing home first time Michael Korper’s right wing pull-back.
Japan, though, turned the game on its head with two goals in two minutes when Ryuji Fukushiro deflected in a well-worked auto-pass move and Yoshihiro Anai spectacularly clattered in a bouncing backhand shot after his initial drag-flick was blocked down.
The lead was extended out to 4-1 in the second half thanks to Genki Mitani’s double strike from close range - the second showing a neat first touch to escape goalkeeper Lukas Graser and roll into the ensuing open goal.
Wolfgang Laminger cut through the centre to the Japanese defence for a consolation, though Japan should have concluded the game with a three-goal advantage when a beautifully worked corner found only Ryuji Furusato’s foot mere inches from the goal.
Posted by Jugjet Singh at 6:39 PM

Stiff Irish test for our boys

MALAYSIA can expect a stiff challenge from hosts Ireland in the semi-finals of the Champions Challenge II in Dublin, today, but they have no choice but to win to ensure hockey stays alive in the country. The Champions Challenge II gold medal is vital for Malaysia to start pulling their way back into the higher level of the game.
A defeat will surely mean more misery for Malaysian Hockey Federation (MHF) president Tengku Abdullah Sultan Ahmad Shah and his council.
Malaysia have not been impressive in their pool matches, having done just enough to keep their gold medal hopes alive.
They edged Austria 3-2, France 4-2 and Russia 4-3 to remain unbeaten -- which in itself is a rare feat for the national team in the last decade.


Making it more difficult for Malaysia today will be former international Arul Selvaraj, who is an assistant coach in the Ireland team.
Arul said he feels awkward planning to topple his friends and country.
"I am excited at the prospect of guiding Ireland to the top of the podium, but at the same time, feel a little awkward. I've always been in the Malaysian camp as a player or coach (he assisted Paul Lissek) and now I will be facing my friends and players who I have coached before," said Arul via e-mail.
On the Malaysian team, Arul said: "Malaysia are physically better prepared, and have better international exposure while Ireland are tactically better, but lack experience.
"I predict that penalty corners will decide who wins," said Arul.
This is an Irish forte and they have penalty corner flicker John Jermyn to thank for their identical 3-0 wins over Chile and Japan.
Jermyn scored five of the goals. He was, however, off target against Poland and they lost 3-2.
As for Malaysia, Amin Rahim has scored off two penalty corners and one penalty stroke. Penalty corner variations also saw Azlan Misron, Ismail Abu and Tengku Ahmad Tajuddin sounding the board.
The field goals were scored by Faizal Shaari, Hafifi Hafiz, Razie Rahim, Ismail Abu and Kelvinder Singh.
Malaysia scored 11 goals but let in seven, which is a worrying factor, as the Irish have only allowed three goals past them.
"It will be a tough match, and I predict a battle to the end because in my opinion, the Irish are the best prepared team in this tournament.
"We will have to be extra careful at the back, and rely on swift attacks to do the damage," said national coach Tai Beng Hai.
WEDNESDAY'S RESULTS -- Group A: Japan 4 Chile 3, Poland 3 Ireland 2; Group B: Malaysia 4 Russia 3, Austria 1 France 5.
TODAY -- Semi-finals: Malaysia v Ireland (12.05am tomorrow in Malaysia); Poland v France.

Arul Selvaraj on opposite bench

Given the spectator numbers to date, Ireland's match with Malaysia should prove the biggest draw of the Champion's Challenge II to date with the South-East Asian side adorning the crowd with bodhrans and plenty of noise (seen talking to players post-match, below right).

Some may have hoped for the fixture to have been the final but, after Pakistan last year at the Setanta Trophy, the influx of an Asian side to Belfield has brought a distinct extra bit of magic to the tournament and so having the glamour tie against the hosts needed to happen at some stage.
Like Pakistan, Malaysia have shown a 100pc commitment to attacking hockey - fittingly throwing nine men forward with 45 seconds to go of their tie with Russia despite holding a 4-3 lead.
A 70-metre Russian o 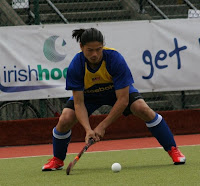 verhead almost caught them out but the Malaysians tend to give sides a chance to play and express themselves, making this afternoon's semi-final Ireland top billing.
For Ireland assistant coach Arul Anthoni, the game will be his first against his country of origin having missed out on that occurrence during his time in South Africa when he was unable to travel to a tournament.
However, he is confident he has the inside track, saying he knows the opposition 'inside-out'. His direct opposite number - Noor Zaiful - was one of his team-mates during his 83-cap career as was current forward Chua Boon Huat (left) while Anthoni has encountered all bar Malaysia's two U-21 players in club action.
Whether that knowledge can lead Ireland to victory tonight remains to be seen but it should be the highlight of what has been a high-scoring tournament to date.