Najmi has already sent a letter to the Malaysian Hockey Confederation (MHC) stating that he no longer wants to play for the country.
Coach Stephen van Huizen confirmed it:
"After the Argentina Tour, he injured his ankle slightly but that is not the reason why he quit the team.
"Najmi just does not want to play for the country after he got married and even though we tried to talk to him he did not want to change his mind.
"The matter has been discussed with the MHC as well as technical director Terry Walsh and it was agreed that if he is no longer interested we can't do anything.
"We did ask him if it was temporary or for good, but he did not want to commit himself.
"Luckily it happened about 40 days before the Games, and we have time to train a replacement," said van Huizen.
Posted by Jugjet Singh at 7:51 PM

The Yes and No of helping women...

KUALA LUMPUR: The national women's hockey team will receive specific help from foreign coaches in preparations for the Asian Games in Jakarta in August.
Australian David Ian Bell will coach on 'tackling' while Martijn Drijver of the Netherlands will train goalkeepers for a week.
And while national coach K. Dharmaraj said it would benefit his charges, Olympian and former Malaysian Hockey Confederation general manager Maninderjit Singh believes there are Malaysian's who can do the job just as well.
"My players do lack in the field of tackling (stopping a player from dribbling past) and it would be helpful in our campaign at the Asian Games when we play higher ranked teams like India, South Korea, Japan and China (depending on grouping).
"I have tried my best and even though they have improved in this department since I took over 30 months ago, having a new prespective from a different coach and approach is always welcome in my books," said Dharmaraj whose charges won the Hockey Series Open in Singapore by hammering Thailand 6-0.
And on the world renowned goalkeepers coach from Netherlands: "He has been here many times and coached out national men as well as women's goalkeepers and is here again to help in our Asian Games campaign.
"Some areas need a specific touch from the experts in that field, and we are lucky to get such help," said Dharmaraj.
However, Maninderjit Singh begs to differ.
"The main weaknesses in the men and women's team is in defence and bringing in David Bell as a consultant in that department is not conducive, because his training methods are old and not suitable with Malaysia's playing style.
"It is a waste of time and money as we do have better local coaches and they should have been utilised instead," said Maninderjit.
Malaysia's chances at the Games all depend on the grouping, which the Asian Hockey Federation have yet to release.
In the men's tournament, the qualifiers are hosts Indonesia, India, Pakistan, South Korea, Malaysia, China, Japan, Oman, Bangladesh, Sri Lanka, Thailand and Taiwan.
There are only 10 teams in the women's event and they are hosts Indonesia, South Korea, China, India, Japan, Malaysia, Thailand, Hong Kong, Taiwan and Kazakhstan.
Posted by Jugjet Singh at 7:14 PM

Najmi's disappearance a mystery for mates... 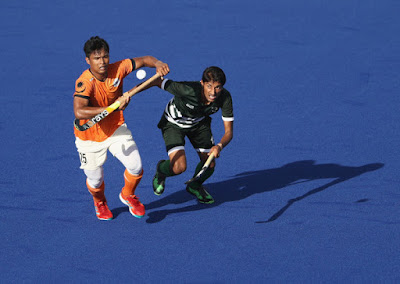 Najmi Jazlan of Malaysia is chased by Mazhar Abbas of Pakistan during the Men's Hockey match between Malaysia and Pakistan on day seven of the Gold Coast 2018 Commonwealth Games at Gold Coast Hockey Centre on April 11, 2018 on the Gold Coast, Australia.
(April 10, 2018 - Source: Robert Cianflone/Getty Images AsiaPac)

KUALA LUMPUR: The disappearance of national defender Najmi Jazlan is not only a mystery to his fans, but it also left his team-mates with more questions than answers.
It was made to understand that Najmi only communicated with coach Stephen van Huzien, while even his best mates in the team were not privy to the disappearance.
National skipper Shukri Mutalib said he believes Najmi has already sent a letter to the Malaysian Hockey Confederation (MHC) stating that he no longer wants to play for the country.
He last played in the Gold Coast Commonwealth Games, and was also on the Argentina Tour for six Test matches in May.
"As a team-mate I am disappointed with his decision to quit the sport becasue we are in the midst of preparing for the Asian Games in Jakarta.
"And he is one of the main players in our team.
"But then, if he really is no longer interested to play for the country, I will respect his decision," said Shukri.
The skipper said he himself could not get in touch with Najmi after the Hari Raya break.
"I really don't know what's the real reason behind his action. Not only I, but all the other players are also puzzled as they can't contact him anymore," said Shukri.
The players are in their final phase of training for the Asian Games in August, with a mission to win gold and qualify for the 2020 Tokyo Olympics.
Coach van Huizen could not be contacted for comments.
Posted by Jugjet Singh at 6:32 PM

KUALA LUMPUR: National women's hockey coach K. Dharmaraj did not discount the inclusion of 14-year-old Kirandeep Kaur for the Australian Tour starting on July 21 as their final preparation for the Asian Games in Jakarta.
Dharma said budding players like Kirandeep would inject competition in the team, and send out a warning that 'no player can take their place for granted' in the national team.
The coach had fielded her in every match at the recent Hockey Series Open in Singapore, and she scored her maiden international goal in the final to help Malaysia beat Thailand 6-0.
"I do not want any players to feel comfortable with their spot in the national team.
"That is why I have added healthy competition by fielding Kirandeep and other young players in the squad. The message here is that players must continuously give their best in every match to keep their spot in the team. And so, the door is open for Kirandeep to be selected for the Queensland friendlies," said Dharmaraj.
And the Tour would be the final platform for Dharmaraj to select 18 players for the Asian Games in August, and this chance can also be snatched by Kirandeep.
The other youth who impressed in Singapore are 17-year-olds Nuramirah Zulkifli and Nurmaizatulhanim Syafi.
"Of course I will only select the best for the Asian Games after the Australian Tour, and all those who will be playing in the Queensland
friendlies have a fair chance of making it to Jakarta," said Dharmaraj.