Former Malaysian greats give back... 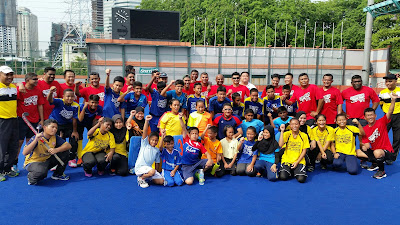 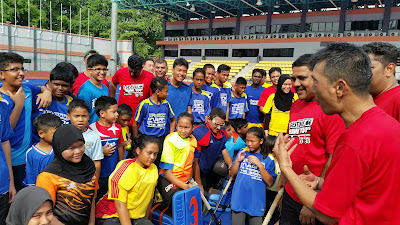 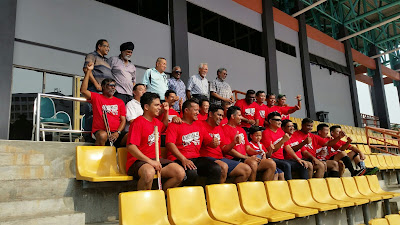 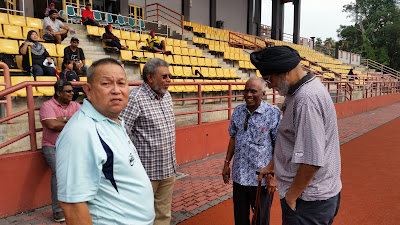 FORMER national players from the batch of 1990-1993 held a coaching clinic and then a friendly match with University Kuala Lumpur (UniKL) Under-16 development players at the Kuala Lumpur HA Stadium Saturday.
And on the stands watching them were their former  team manager Tan Sri Nordin Hassan, chief coach C. Paramalingam, assistant coach Malek Kiew, goalkeeper coach Khairuddin Zainal and team Doctor Datuk Dr Ramlan Aziz.
Khairuddin is best remembered for keeping goal when Malaysia finished fourth in the 1975 Kuala Lumpur World Cup -- Malaysia's best achievement ever.
UniKL development coach R. Vivekanandan and goalkeepers coach M. Nadarajan organised the fun-filled event for children as young as five-years-old.
"This coaching clinic as well as match was held with former Malaysian national players, some of whom played in the Olympics and World Cups, to inspire our youth to reach for the sky," said Vivekanandan.
Some household names from the batch who turned up were three-time Olympian Mirnawan Nawawi, two-time Olympian Maninderjit Singh, Dr Calvin Fernandez , Suhairi Saidi, Lam Mun Fatt and Arul Selvaraj.
Maninderjit said: "We had coaches who literally made us sweat blood but in the end, we had the pleasure of representing the country at the highest level."
Two which Khairuddin replied: "It is better to cry during hard training, that cry after losing a match. Those who train really hard, are the ones who achieve something in their lives."
The free UniKL coaching clinic for players and goalkeepers is held every Sunday at the National Hockey Stadium in Bukit Jalil.
Posted by Jugjet Singh at 5:48 PM