Hockey Pre-Olympic Qualifier Kuala Lumpur April 26-May 4:
Malaysia's No 1 goalkeeper S. Kumar not on list of 18 to be announced Friday.
More in the New Straits Times. 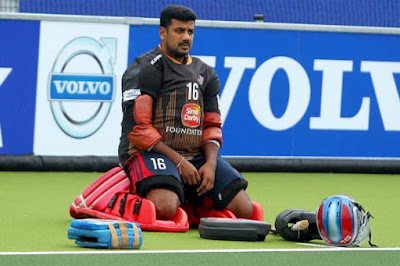 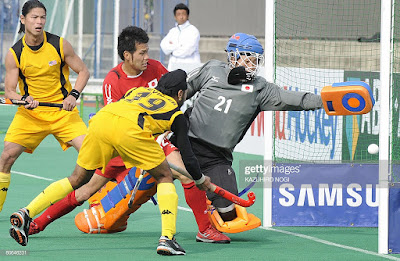 KUALA LUMPUR: Not many know that Malaysia gifted the hockey world Video Referral on April 12, 2008 in Kakamigahara, Japan.
This scribe was assigned to cover the Beijing Olympics Quallifier and was part of the history which opened the eyes of the International Hockey Federation (FIH) on the need for a third-eye.
But sadly, the FIH shut their eyes again when Malaysia needed VR for the World Series which will be held at the National Hockey Stadium in Bukit Jalil on April 26-May 4.
Flashback.
Malaysia, coached by Sarjit Singh, needed to beat Japan while Japan needed a draw to play in the final against mighty Germany.
The scene was serene, as Kakamigahara stadium is surrounded by vast rolling paddy fields, but it turned out to be a day of utter havoc.
The cool evening breeze brought along scents of sakura in full bloom, and the match started well with Malaysia taking a 3-1 lead when the late Chua Boon Huat opened scoring while Jiwa Mohan and Kelvinder Singh added more misery to the hosts and it was only 33 minutes into the match.
But as usual, Malaysia started crumbling and Japan scored their second goal off Tomonori Ono in the 35th minute.
And while Japan celebrated, the crowd kept shouting to the two umpires, Hamish Jamson from Britain and Australian Murray Grime, to look at the big scoreboard which kept showing an amazing replay -- at least three times before the screen went blank.
The replay showed that Ono scored with his right thigh, as the ball missed his stick by inches, but both the umpires' views were blocked.
Grime was standing about 10 feet exactly behind Ono, while Jamson was at the middle of the pitch and his view was blocked too.
Grime blew for goal, while Malaysian goalkeeper S. Kumar kept asking the umpire to look up at the big screen but the Australian never did.
That freak goal ignited a fightback which Japan needed, and they went on to score the third in the 69th minute and qualified to play Germany in the final.
Malaysia were clearly robbed but there was no VR to lean on, back then.
Players were in tears, while coach Sarjit was fuming mad but did not know what to do.
But the German tournament director knew what to do and he approached Sarjit and asked Malaysia to appeal the goal inside 20 minutes, as regulation allows.
The match had already ended 15 minutes ago and with 5 more minutes remaining to place the protest, there was panic at the Malaysian bench on who, how and what to write inside 5 minutes...
This scribe, watching everything unfold before his eyes then stepped in by tearing off a piece from his reporters notebook, writing a two paragraph appeal with flying fingers and handed it to team manager Satish Kumar to sign.
The German TD took the letter, with a US500 deposit, and walked away smiling.
"I remember that faithful day clearly as it started a strong lobby for VR in Europe and the world benefited a year later when VR was used in the Melbourne Champions Trophy.
"The TD gave us back our money (which never happened in any appeal back then) and said that nothing can be done about the goal scored with a thigh, but he will bring up this matter with the FIH to strengthen a lobby for VR.
"Even FIH president Els (Van Breda) was sympathetic with Malaysia's plight and said something would be done soon about it, when I met her later," said Sarjit.
And this is how the hockey world won a referral to have VR, on Malaysia's misery but it brought joy to good decision making for 11 years.

Sadly, it would not be used in Kuala Lumpur for the Series Finals, as FIH decided to be fair to all but unkind to Malaysia.

NOTE: The last 7 paras strengthen reason why VR is needed in Series, after what happened in the 5th Test Mas v India women.

KUALA LUMPUR: Malaysian Hockey Confederation competition manager Brian Fernandez Friday confirmed that the International Hockey Federation (FIH) is treating their video referral appeal as an urgent matter.
The FIH held a meeting Friday, and will let the MHC know in a day or two.
"It's an urgent matter and the FIH are holding a meeting today (yesterday) and will let us know early. We at the MHC strongly believe that as hosts, we need video referral for the Series," said Brian.
The controversy cropped up when the FIH denied Malaysia the right to use video umpiring for the FIH Series Finals which will be held at the National Stadium in Bukit Jalil on April 26-May 4.
In a brief statement FIH competitions committee secretary Martyn Gallivan said: "Following protracted discussions with the different host broadcasters in Malaysia, India, France, Ireland, Spain and Japan it would not be possible to provide the appropriate television feeds in several of the tournaments.
"FIH has therefore decided that the Video Umpire will not be provided at any of the FIH Series Final."
A video referral will not only benefit the hosts, but all teams.
"Lets say another teams calls for a referral and then scores a goal against Malaysia, it works for every team and not only the hosts.
"It was a requirement in the bid paper, and we followed it to the dot and have arranged for the facilities.
"To tell us now that we can't use it because other countries can't have the same set-up is injustice to MHC.
"The last Test match between Malaysia and India (women) is a clear example on why we need video umpiring.
"India claimed the ball hit a leg after the hooter and so there should not be a penalty corner. But the umpires saw otherwise. Video umpiring could have solved the problem and India would not have to walk out without defending the penalty corner," said Brian.
It was an FIH recognised Test but still, hosts Malaysia let India off the hook by not pressing the umpires and Technical Desk to penalise India for not defending the penalty corner.
Instead, an accommodating Malaysian coach K. Dharmaraj called out his charges after a prolonged standoff, as a gracious host.
India coach Sjoerd Marijne also used vulgar words during the standoff, but still, Dharmaraj and the Technical Bench let him go off the hook.
For the record, it was Malaysia 0 and India 1, when Dharmaraj's charges won a penalty corner seconds before the hooter.
A video referral might have drawn the game, but nobody will know the real outcome now: "And this could happen in the Series Open if the FIH do not allow the use of Video Umpire," said Brian.
Posted by Jugjet Singh at 10:08 PM 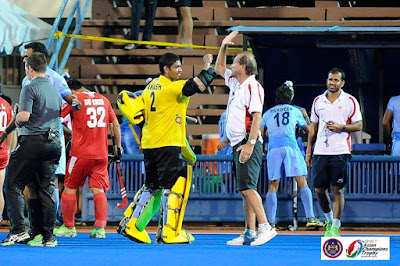 IPOH: Pressure turns charcoal into diamond, and so some 'inspirational words' from Malaysian Hockey Confederation (MHC) president Datuk Seri Subahan Kamal turned a losing side into bronze medalists.
After winning against Poland and Japan, Malaysia took a slide when they were beaten by South Korea and India and lost a chance to play in the Azlan Shah Cup final.
Subahan did not mince his words, or his disappointment, when he lambasted the players and officials, saying that the MHC had given them everything possible and its payback-time.
After the South Korea and India defeats, Subahan had said: "No more excuses, no more statistics to back up a defeat, no more 'we played well but lost'.
"I don't want to hear all this from the coach (Roelant Oltmans) when we play in the Series Finals in KL.
"I want results. And it should start on Friday when we play Canada, and again on Saturday if both teams qualify for the bronze medal bracket," said Subahan.
His prodding saw Malaysia beat Canada 3-2 and 4-2 to win a rare second bronze in the Cup.
However, everybody expected Malaysia to play in the final of the Azlan Shah Cup, and the MHC even had hoped of finally breaking the gold medal jink since 1983.
But it turned out to be just another tournament for the generous hosts, as South Korea claimed their third Azlan Shah Cup gold, India silver and Malaysia bronze.
In the beginning, the hosts beat Poland and Asian Games champions Japan with easy, setting the fans salivating for a miracle.
But this bunch cracked when it mattered most against India and South Korea, and this has been happening for ages.
When Malaysia are under no pressure to deliver, they will even beat the best in any tournament, like they did against Canada in the last pool match.
But when it matters most, the Malaysian team always falters.
But inspired by the warning from Subahan, the failure script was thrown out of the window, and it became a success story, albeit on a smaller scale.
Hopefully Mr President will be on their minds again when they start their pre-Olympic Qualifier, the FIH Series Finals in Kuala Lumpur on April 26 to May 4.
The other teams in this pre-Olympic Qualifier are not big guns and Malaysia even has the advantage as hosts.
Group A is made up of Canada, Austria, Wales and Belarus.
Malaysia are in Group B with China, Brazil and Italy.
An appearance in the final against Canada, and a possible gold medal by beating them for the third straight time, is what MHC and Malaysia needs going into the final Olympic Qualifier in November.
Posted by Jugjet Singh at 1:58 PM