As has widely been reported, smoke from large-scale forest fires in Indonesia has been drifting east and negatively affecting the air quality in Malaysia and Singapore.
With a view to the Hockey World League Semi-Final event starting in Johor Bahru on Saturday, the International Hockey Federation is closely monitoring the situation and developments in co-operation with the Malaysian Hockey Confederation, Malaysian government agencies and FIH Tournament Director Björn Isberg who has already been on the ground in Singapore for several days.
At this stage, our information is that the situation has been improving over the last two days, with the PSI (Pollutant Standards Index) dropping below 100 in Johor Bahru after peaking over 300. The forecast for the coming days is positive with an expectation for north-west winds and precipitation, which will contribute to further alleviate the situation but the possibility of sudden changes in wind direction remains, affecting the predictability of the development of the situation.
FIH is receiving updates on pollution and air quality data every four hours and is evaluating the situation and developments on an ongoing basis. Per the recommendation of the FIH Medical Committee, FIH's policy indicates that a match may be started or proceed if the PSI does not significantly exceed 100 for a prolonged period of time, but no match may be started or proceed at readings of 150 or above.
This policy is in line with the recommendations of the Malaysia Ministry of Natural Resources and Environment as well as the widespread consensus amongst government agencies worldwide which consider
• PSI values below 100 to indicate no to moderate pollution levels with few or no health effects for the general population,
• PSI values of 101-150 to have harmful impacts on sensitive groups of the population, and
• PSI values of 151-200 to have harmful impacts on sensitive groups of the population and cause transient symptoms of irritation e.g. eye irritation, sneezing or coughing in some of the healthy population.
FIH President Leandro Negre said, “The FIH is firmly committed to taking all measures necessary to protect the health and safety of athletes and officials participating in the upcoming Hockey World League Semi-Final event in Johor Bahru and to ensure a suitable high performance environment for a fair competition. Contingency plans are in place for the case that pollution in Johor Bahru returns to unhealthy to hazardous levels, including the possibility of relocating the event to a different city.”
FIH will continue to monitor the situation and will keep participating teams informed of all developments in due course.
Posted by Jugjet Singh at 7:36 PM

Haze starts to clear up in Johor Baru..

THE Hockey World League Semi-finals looks set to stay in  Johor Baru, as the haze conditions have shown tremendous  improvements with rain around the Taman Daya Stadium  bringing some relief yesterday.
The Malaysian juniors, South Korea and Argentina trained  at the tournament venue yesterday, and according to juniors  coach K. Dharmaraj, conditions at present are playable.
“While travelling from Kuala Lumpur to Johor Baru con ditions along the highway were bad a few days back, but  when we reached Taman Daya, there was hardly any haze  and we got a chance to play a friendly against the Argentina  side (on Sunday),” said Dharmaraj who is preparing his team  for the Junior World Cup in India in December.
The Malaysian juniors got a chance of their life-time, as  many teams will be using them to spar in the run-up to the  World League.
“Even though we lost 3-1 to Argentina, the Argies did not  look too impressive but maybe it is because of jet-lag and  acclimatisation. We will be playing a friendly against South  Korea next and then Japan which is a fantastic opportunity  for my charges to toughen themselves ahead of New Delhi,”  said Dharmaraj.
Organising secretary Manjit Majid Abdullah said there was  heavy rain in Pasir Gudang, and a drizzle in Taman Daya and  the forecast for the next few days looks good.
“I spoke to the tournament director (Bjorn Isberg of  Sweden) and we have a contingency plan in place. If the haze  disrupt any match, we have three rest days and can utilise  them.
“Also, the conditions around Kuala Lumpur and Kuantan  are worse off than Johor Baru, and moving the tournament is  not feasible at the moment,” said Manjit.
Yesterday, a total of RM640,000 was handed over by  sponsors to the Johor Hockey Association in a simple cer emony that marks the countdown of an event where three  more teams will qualify for the 2014 World Cup in Holland.
Present to receive the sponsorship was Johor State Ex ecutive Councillar for Youth and Sports Datuk Zulkarnain  Kamisan. Also present was JHA President Jais Sardy and  Malaysian Hockey Confederation vice president M. Gob inathan.
Eight teams will compete in Johor Baru on June 29-July 7.  Group A comprises of Germany, South Korea, Argentina and  Japan while Group B has England, Pakistan, South Africa and  Malaysia.
A total of 12 teams will play in the 2014 World Cup where  hosts Netherlands are automatic qualifiers while Belgium  and Australia qualified after finishing one-two respectively in  another World League Semi-finals which ended at the The  Hague on Sunday.
Posted by Jugjet Singh at 5:39 PM

The final between Australia and Belgium at the Rabobank Hockey World League tournament in Rotterdam lived up to expectations as Belgium claimed the first-ever title at the event in a dramatic nine-round shootout victory.

There was no shortage of drama in the game as Belgium came back from a one-goal deficit to take a 2-1 lead only to see it erased in the last minute by a Russell Ford strike. The shootout was no less dramatic as it took an amazing nine rounds to settle things. It was only when Chris Ciriello shot wide on the final Australian chance that the game was decided and Belgium could celebrate its first-ever title at a top-level FIH event.
It was a battle throughout the 70 minutes with neither team giving the other much breathing space. Australia’s Christopher Ciriello broke the stalemate doing what he does best – firing in drag flicks. Ciriello put all his might into the flick on a diving effort that hit the far corner of the goal and lifted Australia to a 1-0 lead 21 minutes into the game.

It was a lot of back-and-forth with the Aussies showing a little more strength as the game wore on. But Tom Boon sparked Belgium to life when he got his stick on the ball with a well-timed deflection that sent the ball top shelf for the equalizing goal in the 49th minute.
Sebastien Dockier was left unchecked at point blank range in front of the Australia net and it cost the World #2 team dearly as he was fed a centering pass that he easily popped in to give the Belgians the 2-1 lead with 11 minutes to go in the game with 11 minutes to go in the game.

Russell Ford struck with exactly 60 seconds left on the clock deflecting the ball up and over Belgian goaltender Vincent Vanash to tie the game at two and send the game to a deciding shootout.
The game was a rematch of a preliminary round meeting between the two teams, which Belgium won, 3-1. Ultimately, that win gave Belgian the easier road to the final game as the top seed out of their preliminary round.

The win gives the ninth-ranked Belgians their first-ever victory at a top-tier FIH event, a true feather in the cap for the country, which has shot up the FIH World Ranking and enjoyed massive success in the last few years. It is also a major momentum builder for the Belgians for the EuroHockey Championship, which they will host.
Posted by Jugjet Singh at 5:36 PM 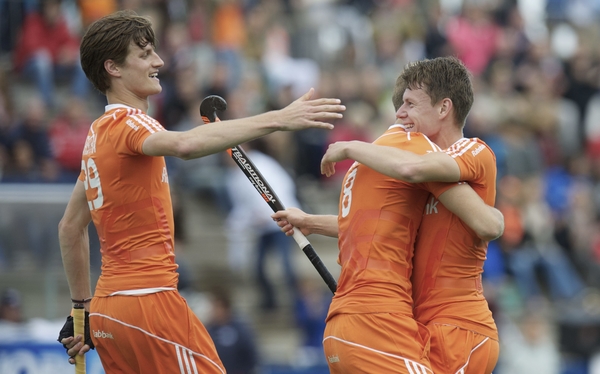 Jeroen Hertzberger’s double helped the Netherlands land third place from the World League semi-final in Rotterdam, leaving New Zealand having to wait and see whether they will be confirmed as a 2014 World Cup qualifier.
It was primarily down to a controlled second half performance to see off the Blacksticks who had taken the game to the hosts in the early phases. Against the run of play, New Zealand hit the front as Phil Burrows burst through down the right channel and picked out the narrowest of gaps by Pirmin Blaak’s left boot, taking a 1-0 lead in the 13th minute.

That advantage, though, lasted just five minutes as Rogier Hofman’s excellent baseline run opened the door and he fired across for Jeroen Hertzberger to touch in his tenth goal of the tournament. It remained locked at 1-1 until the break as Billy Bakker’s rising shot was brilliantly saved by Hamish McGregor just a couple of seconds before the interval.
But the Dutch took control in the second period as Hertzberger netted his second of the game with a powerful drag-flick soon in the 39th minute. Valentin Verga’s left wing cross-shot from a tight angle then deceived all before him with defender Stephen Jenness getting a slight touch to redirect the ball into the goal.

From there, New Zealand battled hard with a couple of near misses in the closing quarter but the Dutch rounded off proceedings in the closing minutes when Jelle Galema swept home after Hofman again created the chance down the right.