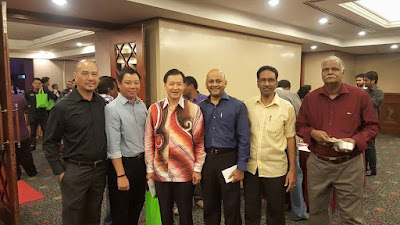 THE old boys of Lasalle Klang, popularly known as OLAK, are getting back together on the 22nd of October 2016 at a grand dinner to celebrate 25 years of the existence of its association, to be held at the Top Glove Ballroom, Level 9, Top Glove Tower, Persiaran Setia Indah, Alam Nusantara, Selangor.
OLAK is inviting old boys from as far back as 1963, teachers who have retired as well as present teachers in the school to attend this reunion to rekindle old relationships. Many ex-students who have migrated overseas will be making the journey back home to spend some precious moments with old friends, teachers and family too.
Marking this significant milestone will be a sumptuous 10-course Chinese dinner, a special opening ceremony featuring the St. Johns Institution Bagpipers, music and songs of yesteryear by the ever popular STAG band from Klang, an all-Lasallian cast of entertainers made of old and present students, door gifts and raffle draw with fantastic prizes.
Demand for tables for the event has been amazing and those who have not got their tables yet are urged to do so right away to avoid disappointment. Tables are priced at RM5000, RM3000 and RM1000. Proceeds will be used to defray costs for the dinner and profits generated will applied to OLAK’s various student empowerment, and school-related programs.
OLAK’s sports programs, especially its hockey team is always on the lookout for generous financial assistance. OLAK has the distinction of being the only school alumni to have fielded a team in the Malaysian Junior Hockey League since its inception in 1995 to the present day. The OLAK Hockey     Team were MJHL Champions in 1997, 1998 and 1999, and overall Champions in 1998 and 1999 and 2000. OLAK are the first and only team to have achieved such a feat of three championships in a row.
OLAK are also regular participants in the Pesta Hockey Penang USM Six-a Side where OLAK has been champions numerous times. OLAK also plays an active role in facilitating job placements for it’s hockey players, as well as placements in institutions of higher learning.
If you are a Lasallian from Klang and want to get your dinner tickets, please call our OLAK Secretariat c/o Caxton House, No. 8 Jalan Stesen, 41000 Klang, Selangor, and ask for Joseph D’Silva 019-6491927,  Ho King Min 012-3259188,  K Selva ( 012-3600358).
Posted by Jugjet Singh at 6:51 PM

THE Malaysian Hockey Confederation (MHC) never received Pakistan's confirmation letter, but the International Hockey Federation (FIH) have received their team list for the Asian Champions Trophy on Oct 20-30 in Kuantan.
MHC CEO K. Logan Raj is still waiting for the confirmation letter, even as travel arrangements have been forwarded to them.
"Surprisingly, Pakistan sent their team list to the FIH and not the hosts or organisers Asian Hockey Federation (AHF). They wrote to us only today (Friday) about their travelling schedule and are expected to arrive on Sunday," said Logan.
The MHC were ready to run a five-team tournament, as Pakistan never responded to the queries until the cut-off date on Oct 6.
Malaysia will be up against defending champions Pakistan, Asian Games champions India, South Korea, Japan and China in the ACT which will offer FIH ranking points for the first time.
On another matter, MHC are also closely following Pakistan's entry for the Junior World Cup on Dec 8-18 in Lucknow, India.
"There has been online reports saying that Pakistan might not play in the Junior World Cup because of security reasons and if that happens, Malaysia are the No 1 standby to replace them.
"Even though its a far shot, but we cant wait for the final moment to prepare if it happens," said Logan.
The Malaysian juniors, who finished fifth in the Junior Asia Cup in Kuantan and missed the boat to Lucknow, will be playing in the Sultan of Johor Cup and that could be their training ground to select players if Pakistan are unable to compete in India.
The SOJC, the only junior invitational tournament in the world, will be held in Johor Baru on Oct 31-Nov 6 where the hosts will battle Pakistan, Australia, New Zealand and Japan.
For the record, Malaysia beat Argentina 3-2 for the bronze in the last edition.
Posted by Jugjet Singh at 6:44 PM

THE Malaysian Hockey Confederation (MHC) are still awaiting for Pakistan to send in their confirmation letter to play in the Asian Champions Trophy in Kuantan on Oct 20-30.
MHC, the hosts, gave them until Oct 6 to reply but after sending Pakistan Hockey several reminders, they have hit a brick wall.
"Yes, we have yet to get a confirmation letter from Pakistan. And our cut-off date was Oct 6, but the Asian Hockey Federation (AHF) asked us to wait until today (yesterday).
"But we have not received anything from them. If they do decide to come after this, they will have to make their own internal travel and accommodation bookings," said MHC CEO K. Logan Raj.
And if Pakistan fail to turn up?
"The tournament will go on with five teams, and the semi-finals format will be maintained after the pool matches," said Logan.
It is believed that Pakistan, champions of the last edition, have yet to get the green-light from their government to play in Kuantan.
The teams which have sent confirmation are hosts Malaysia, India, South Korea, China and Japan.


The ACT offers International Hockey Federation (FIH) ranking points for the first time in its Fourth Edition, and media reports in Pakistan say that they have already selected a team for Kuantan.
Posted by Jugjet Singh at 11:44 AM