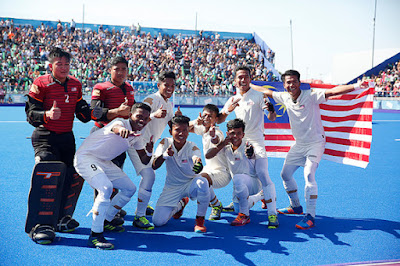 KUALA LUMPUR: The Malaysian Under-18squad has opened up a can of opportunities, as they did the unexpected and delivered a gold medal in the Youth Olympics Hockey 5s in Buenos Aires Monday.
It was a sweet 4-2 win over India in the final, as hockey made its debut in the Third Youth Olympics and nobody expected them to travel the distance and return with gold.
Vivek Sagar Prasad gave India the lead in 2nd minute, but Firdaus Rosdi equalised in the fifth.
Vivek again gave India the lead, but goals from Akhimullah Anuar Esook (14th, 18th) and Amirul Hamizan Azahar (17th) handed Malaysia a well fought gold medal.
For the record, Akhimullah scored a total of 22 goals in the tournament.
"This is a monumental achievement for our youth, as frankly, when they qualified for the Youth Olympics we waved them on their journey by telling them to do their best.
"But they achieved a marvellous milestone not only for themselves, but made the whole country proud with a fantastic display," said Malaysian Hockey Confederation (MHC) president Datuk Seri Subahan Kamal.
Subahan gave credit to the 1Mas Programme for building a strong foundation for this group of players.
"Most of the boys are from the 1Mas Programme initiated by Tunku Abdullah (Sultan Ahmad Shah) and we would like to thank all the coaches involved in nurturing this batch of youth.
"Credit goes to the Education Ministry for giving these boys a leeway whenever we needed them, and also the National Sports Council (NSC) for their undying help towards hockey," said Subahan.
MHC have changed the 1Mas structure by introducing a new youth development programme, and hope the NSC give them a leg up.
The toast of the team, coached by Wallaca Tan and Megat Azrafiq, is Akhimullah Anuar Esook who scored a total of 22 goals to almost single handedly snatched the gold medal.
"These boys have tremendous potential and are our future to lead in qualifying for the 2021 Junior World Cup. Akhimullah, for one, has shown great potential and even Technical Director Terry Walsh feels the same," said Subahan.
Akhimullah is a product of Sekolah Sukan Tunku Mahkota Ismail and in 2016, as a 16-year-old, played with the Malaysia Blue in the Australian Hockey League.
Posted by Jugjet Singh at 4:26 PM