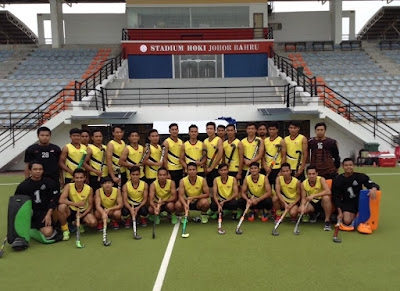 Completed their training in Taman Daya

THE national juniors have one week to sharpen themselves up before they do battle in the Fifth Edition of the Sultan of Johor Cup at the Taman Daya Stadium in Johor Baru.

The only Under-21 Invitational sanctioned by the International Hockey Federation (FIH) will see Malaysia go up against back-to-back champions India, Pakistan, Australia, Argentina and Britain on October 11-18.
The juniors, who just returned to Kuala Lumpur from a training stint at Taman Daya, will play friendlies with the national senior squad on Oct 6 and 7, and will also host Britian to a warm up match on the Oct 9, before the final squad is named.
Juniors coach Arul Selvaraj will be banking on Shahril Saabah, Haziq Syamsul and Meor Azuan Hassan to deliver the goods as the trio have enough experience to lead the team.
Shahril has played in the World Cup, Asian Games and Commonwealth Games with the senior side even though he is only 21.
Haziq has seen action in the Commonwealth Games and 2013 Junior World Cup, while Meor has played in the Asian and Commonwealth Games.
“I never rely on individual players, but their combined experience is vital to stabilise the team,” concluded Arul.
And with the Junior Asia Cup slated on Nov 14-22 in Kuantan, Malaysia, India and Pakistan will be looking to get into gear as the tournament will offer four tickets to the Junior World Cup.
India have already booked themselves a spot in the Junior World Cup as the host nation and all Malaysia need to do in Kuantan is to qualify for the semi-finals to cement their spot in the world cup.
With that in mind, head Arul will be keeping his cards close to his chest during the SOJC, as rivals India and Pakistan will certainly be on the lookout for their strength and weakness.
“Unfortunately this is the only tournament I have to test the boys and I am well aware that India and Pakistan will be keeping a close eye on us, with that in mind I will not reveal much during the tournament but will ensure the boys give their best,” said Arul
Malaysia finished a disappointing fifth in the previous edition of the SOJC but are confident to walk away with a better result this time around.
“I am prepared to see some heavy legs; the boys have been working extremely hard in training and I think they will see good results in return,”
“We will take one game at a time. I am taking each game tactically, as I have plans on trying a few different tactics and we will build the team from there.
“My biggest concern is injuries. With the Asia Cup just around the corner I have to keep my fingers crossed and hope none of my players gets injured,” added Arul.
Posted by Jugjet Singh at 5:12 PM