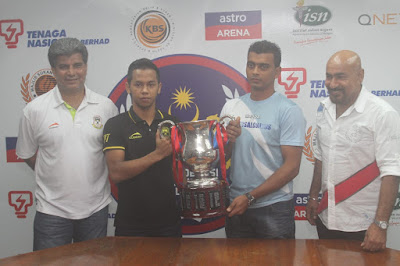 FORMER National coaches Sarjit Singh and Gurmit Singh were all-praises about each other's abilities yesterday, but the good friends will leave no stone unturned to beat the other to the 54th Razak Cup Division One title at the National Hockey Stadium in Bukit Jalil Sunday.
Gurmit will have a slight advantage, as Polices' secret weapon has been penalty corner specialists Razie Rahim and Baljit Singh, while Nabil Fiqri is a super feeder.
Former national player Baljit has completed his Inspector's training, while national players Nabil and Razie joined a nine-month training stint with Police on May 8, but received exemption to play hockey.
Sarjit will again bank on his 13 Malaysia Games players, and Faizal Shaari, who is tied on five goals with Razie for the top-scorers' award.
In Division Two, Perlis will play Penang and the champion will gain promotion. And in the inaugural women's Razak Cup, Pahang will play Armed Forces.
"I was assistant coach to Sarjit for the 2008 Olympics Qualifier in Japan (Kakamigahara) and learned much from him. We are very good friends off the pitch, but for four quarters tomorrow (today) we will be planning to beat the other at any cost," said Gurmit.
Police have had a fairy-tale run thus far, as last season they ended as Division Two champions with 17 goals scored by their skipper Baljit. And barely 12 months later, they are in the final of Division One.
"We had had had a tough journey to reach the final, with Malacca (2-2) and Perak (3-0) giving us a really tough fight (Police scored all three goals in the last quarter).
"And with the cup just one step away, I believe my team-mates will give their very best to win the first Division One title for Police," said skipper Baljit.
Terengganu, who last won the title in 2012, but Sarjit is a master tactician, who has turned his 13 Malaysia Games players into gems.
"My young players have a never-say-die attitude and execute different plans for different teams without asking questions.
"They have managed to adapt to many different styles of play in this tournament, and even though Gurmit is a very good friend, I have a plan to beat his team to the title," said Sarjit.
Both Sarjit and Gurmit were unceremoniously dumped after Malaysia finished third in the Kakamigahara Olympic qualifier, but rose from the ashes to lead their teams into the final.
RESULTS: Division One: Third-Fourth: Malacca x Perak x; Fifth-Sixth: Negri Sembilan x Kuala Lumpur x; Seventh-Eighth: Pahang x Johor (6pm, Pitch I).
Division Two: Third-Fourth: Kelantan x Forces x.
Women's Round Two - Group X: Malacca x Pahang x; Group Y: Perak x Selangor x; Group M: Terengganu x Malacca x; Group N: Johor x Penang x.
SUNDAY: Division One Final: Terengganu v Police (8.35pm, Pitch II).
Division Two Final: Penang v Perlis (6pm, Pitch II).
Women's Final: Pahang v Armed Forces (4pm, Pitch II); Third-Fourth: Kuala Lumpur v Selangor (4pm, Pitch I); Fifth-Sixth: Malacca v Perak (9.30am, Pitch II); Seventh-Eighth: Terengganu v Johor (7.30am, Pitch I); Ninth-10th: Sarawak v Penang (7.30am, Pitch II); 11th-12th: Kedah v Sabah (9.30pm, Pitch I).
Posted by Jugjet Singh at 4:26 PM

TERENGGANU will play Police in the final of the 54th Razak Cup Sunday at the National Stadium in Bukit Jalil.
In the semi-finals, Terengganu dumped defending champions Malacca 4-0, while Police beat silver medallists Perak 3-0.
It was an amazing feat from both the finalists, as Terengganu finished a lowly sixth last season, while Police gained promotion after becoming champions in Division Two.
Malacca were in total shambles, as Terengganu slowed down the match and scored a goal in each quarter.
Faizal Shaari opened scoring with a reverse stick in the third minute, and contributed another in the 32nd minute. The other goals were scored by 16-year-old Akhimullah Anuar (25th), and Firhan Ashaari (60th).
As for Police, their opening goal was scored with a tap-in by Kamarudin Latiff, after a super solo run and a reverse stick pass from national player Nabil Fiqri in the 48th minute.
The second goal followed soon, with a field attempt from Faizal Raza in the 52nd minute. And Nabil rounded up the score to 3-0 with a field attempt in the 56th minute.
"Our plan worked well as we deliberately slowed down the match to our pace. Malacca are a very fast outfit, and to play their pace would have been disastrous.
"We were sixth last season, and it is an achievement to reach the final this year. We have a chance to lay our hands on the title, and I believe my players will not waste this golden opportunity," said Terengganu coach Sarjit Singh.
Terengganu's revelation in the Razak Cup is Akhimullah, 16, and going places.
"He just returned from the Mannheim (Germany) Under-16 tournament and his parents gave him leave to play in the Razak Cup. He scored the second goal today (yesterday), which eased some pressure on us. I believe he has many more good years to offer his state, as well as the country," said Sarjit.
Akhimullah scored two goals against the German Under-17 team in Mannheim, to hold them 5-5.
"I could not have asked more from my players, who rose from Division Two champions to enter the Division One final. This a great moment for the Police Force, and hopefully, we can lift the trophy on Sunday," said Police coach Gurmit Singh.
RESULTS: Division One -- Semi-finals: Malacca 0 Terengganu 4; Perak 0 Police 3.
Division Two: Semi-finals: Penang 7 Kelantan 3; Armed Forces 1 Perlis 4; Seventh-Eighth: Sarawak 2 Kedah 4; Fifth-Sixth: Selangor 8 Sabah 2.
Women's Round Two - Group X: Kuala Lumpur 5 Malacca 1; Group Y: Armed Forces 6 Perak 2; Group M: Sarawak 0 Terengganu 3; Group N: Sabah 1 Johor 3.
SATURDAY: Division One: Third-Fourth: Malacca v Perak (8pm, Pitch II); Fifth-Sixth: Negri Sembilan v Kuala Lumpur (6pm, Pitch II); Seventh-Eighth: Pahang v Johor (6pm, Pitch I).
Division Two: Third-Fourth: Kelantan v Armed Forces (8pm, Pitch I).
Women's Round Two - Group X: Malacca v Pahang (7.30am, Pitch 1); Group Y: Perak v Selangor (7.30am, Pitch 2); Group M: Terengganu v Malacca (9.30am, Pitch 1); Group N:  Johor v Penang (9.30am, Pitch 2).
Posted by Jugjet Singh at 3:27 PM