JOHOR Juniors came back twice in regulation time to beat Olak-NurInsafi in a shoot-out in Division One of the Junior Hockey League yesterday.
Olak-NurInsafi took the lead, and then were leading 2-1, but Johor Juniors failed to be broken and equalised before winning the shoot-out 3-2.
Johor Juniors received two points while Olak-NurInsafi one point.
Johor got their goals off Shafiq Hassan (32nd) and Kamarulzaman Kamaruddin (58th) while the Olak-NurInsafi goals were scored by Nur Najibrullah Ramle (22nd) and Adam Hafiz Hrsikesa (50th).
"Nothing went right in our season opening JHL match, we took the lead twice but fumbled and it was a nightmarish shoot-out," said Olak-NurInsafi team manager Joseph de Silva.
Johor team manager Shahbuddin Royani said: "We need to improve in our penalty corners as we had 11 in the match but failed to make them count.
"But considering the fact that I had players as young as 15-years-old in the team, the two points is a good result to start our campaign as my boys showed fighting spirit to come back from being a goal down twice in the match."
It was the only Division One match yesterday.
RESULTS: Division One -- Johor Juniors 2 Olak-NurInsafi 2 (Johor won shoot-out 3-2).
Division Two: Group B -- MISCF-UFL 1 Terengganu Juniors 2, MSSWPKL 3 MCKK 3 (MCKK win shoot-out 2-0); Group C: Young Hurricanes 1 TBSS Tampin 3, SSTMI Juniors 4 MBMB Warriors 2.
GIRLS' Group A: USM Juniors 1 Sabah Sports School 5.
Posted by Jugjet Singh at 8:37 PM 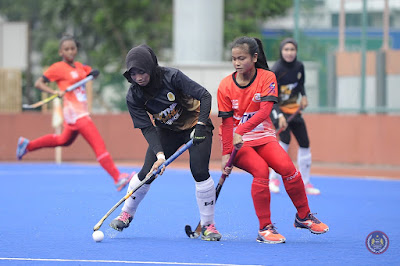 OLD LA Sallians Association of Klang-NurInsafi dropped two players due to indiscipline, something which the pioneer Junior Hockey League (JHL) club has never tolerated.
They will head to Batu Pahat to play Johor Juniors Sunday with 20 players, but team manager Joseph de Silva has no regrets.
The JHL allows registration of 22 players, with 18 registered for every match.
"We dropped Kavinash Panicker and Ekmar Isa due to discipline problems and even though we were not allowed to register two more players to replace them, we would rather play with less than have indiscipline players on the squad," said Olak-NurInsafi manager Joseph de Silva,
The players were dropped for failing to turn up for training, as they were only interested in playing friendly games. And as registration had already closed on March 15, the Malaysian Hockey Confederation (MHC) did not allow replacement.
"These two players were given a chance to play in a Division One outfit, but they blew it because of their attitude. They only wanted to play friendlies in the run-up to the JHL, but refused to come for training sessions," said De Silva.
There will only be one Division One match today, while the fixtures are heavy on Division Two.
"We did not do well last season (finished seventh) but with the inclusion of five NurInsafi players, we hope to be among the top-four."
The five NurInsafi players have experience playing in the Malaysia Hockey League in Division One this season and should form the back-bone of Olak.
RESULTS -- Girls Group A: Wipers 0 SSTMI 1; Group B: USM 6 Zaaba 1, Uniten 1 Johor Juniors 1.
SUNDAY: Division One -- Johor Juniors v Olak-NurInsafi (Batu Pahat, 5pm).
Division Two: Group B -- MISCF-UFL v Terengganu Juniors (KLHA, 8pm), MSSWPKL v MCKK (KPM, 5pm); Group C: Young Hurricanes v TBSS Tampin (Malacca, 5pm), SSTMI Juniors v MBMB Warriors (SSTMI, 5pm).